This Longhorn Steakhouse bread recipe is the perfect copycat of their delicious, soft, and heart-warming bread. Best of all this recipe is incredibly easy to make and it’s one of the best sides for almost any dish. Not to mention, unlike most bread recipes, you don’t need to be a pro to make it!

If you've ever been to Longhorn Steakhouse, then odds are you've had their delicious bread. I mean, who can refuse a free basket of bread? Am I right?!

Well, since my wife and I recently went to Longhorn Steakhouse and devoured the bread they served with our meal I knew I wanted to recreate it at home. And, well, this recipe is that recreation - shout out to Simply Side Dishes for coming up with it!

This honey whole wheat bread is soft inside with the perfect crust and unmatched flavor.

And this bread recipe might be the easiest homemade bread out there. Just 5 simple steps are all you need to follow to make it.

Also, since it's so easy to make, it's a no-brainer to serve with literally any main dish that you're making.

My favorite meals to make it with are this spicy chicken chipotle pasta, this chicken and shrimp carbonara, this four cheese pasta, and this Longhorn bourbon salmon.

And it makes a great sandwich bun for this grinder sandwich or Panera Bread turkey sandwich.

You could even use it to make this southern stuffing!

But, honestly, it's delicious on its own with a slab of butter, or even served with breakfast!

Anyway, now that you know just how versatile this bread is, let's get to the ingredients.

As I mentioned just a second ago, the ingredients you need to make this honey whole wheat bread are pretty common kitchen staples - or at the very least easy to find.

Anyway, here's what you need to make this Longhorn bread:

Now, there are a few special ingredients in this recipe, but their imperative to get the same deliciousness that the bread Longhorn has. So, with that said, I highly suggest you grab whatever you don't have at home from the grocery store.

However, if you're looking for a simpler bread recipe, this Little Ceasars cheese bread or Instant Pot bread would be good ones to try.

How To Make Longhorn Steakhouse Bread

Ok, so this copycat Longhorn Steakhouse bread recipe makes 2 loaves of bread. And that means you should have enough bread for a few dinners during the week!

But, if you only want one loaf, you can cut this recipe in half - it's totally up to you!

Now, let's not waste any more time, and get right into the recipe.

Ok, so to a large mixing bowl you'll want to add ¾ cup of the wheat flour, ¾ cup of the all-purpose flour, all of the sugar, the salt, and the yeast

Then, give all of the dry ingredients a good mix using an electric whisker until they're all combined.

Next, add the butter and honey to the bowl, and mix until they thoroughly combine with the dry ingredients.

Then, gradually add the buttermilk to the bowl, and beat them with the electric mixer for about 2 minutes until a dough starts to form.

After that, add the remaining whole wheat and all-purpose flour into the bowl, and mix until the dough is no longer sticky.

Ok, so now that you have a bread dough, put it on a lightly floured surface and knead in the mixed grains. Then, you'll want to knead it for about 10 minutes until the dough is elastic and smooth.

Oh, and just so you know, you can either knead the bread with your hands, or if you have a stand mixer you can use the dough hook.

Now that the dough is kneaded, set it in a bowl covered with plastic wrap and place it in a warm spot for about about 60-90 minutes - or until it doubles in size. Just keep in mind the amount of time it takes to rise will depend on how warm the room is.

Also, if the dough has doubled its size before reaching 60 minutes, then you can move on to the next step -  sometimes dry yeast activates faster than others and it's hard to pinpoint a time.

Then, set the two halves of dough on a baking tray lined with parchment paper and let them rise again until they double in size.

Then, make 3-4 slits on top of each loaf of bread and put the baking tray in the oven. Bake the bread for about 25-35 minutes - or until golden brown.

Finally, let the bread cool for a few minutes, slice, and serve with some butter.

How to Store Bread

So, as you know, this wheat bread recipe will make two loaves. And you'll want to store it just like any bread.

I've found that the best way to store it, is in a plastic bag tightly closed with the air taken out of it. You can also use a bread box or shallow airtight container

Properly stored, this homemade bread can last 3-4 days. But if you don't think you'll eat it within that time frame, you'll want to freeze the bread and it will last frozen for up to 3 months.

How To Reheat Bread

My favorite way to reheat bread is by putting it in the toaster oven. You can either put in on the warm function if you just want to heat it up or actually toast the bread if you want a slice of toast.

I think the best way to eat the wheat bread is with some peanut butter, cinnamon, and a drizzle of honey on top.

Does Longhorn have bread?

How many calories are in a loaf of bread from Longhorn Steakhouse?

There are 1,447 calories with 28 grams of protein, 307 grams of carbs - 22 grams of which are fiber - and 15 grams of fat in a loaf of bread from Longhorn Steakhouse. Like the majority of bread, it is pretty high in carbs. But if you want to give some storebought bread a try that is lower in carbs and calories, check out this low calorie bread list!

Well, that is how to make Longhorn Steakhouse bread.

This is a delicious, soft bread with wonderful texture and flavor. It goes so well with breakfast, lunch, and dinner. Not to mention, you can use it to make a sandwich, dip in pasta sauce, or eat it with some of this spicy hummus.

Anyway, I hope you like this Longhorn bread as much as I do. If you make it, leave a comment below and let me know what you think!

If you liked this wheat bread from Longhorn, we have a ton of other copycat recipes from other restaurants that you can try out next!

Check out these recipes: 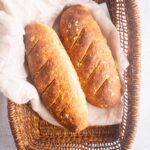 This Longhorn Steakhouse bread recipe is the perfect copycat of their delicious, soft, and heart-warming bread. Best of all this recipe is incredibly easy to make and it’s one of the best sides for almost any dish. Not to mention, unlike most bread recipes, you don’t need to be a pro to make it!