Crispy on the outside, and perfectly soft on the inside, these air fryer hash browns are a healthy, oil-free version of this popular breakfast and brunch side. And all you need to make these homemade hash browns is a few simple ingredients and just 15 minutes!

Hash browns are such a delicious breakfast side dish. And these hash browns are not only super tasty, but they're super easy to make too.

Seriously, it takes only about 15 minutes from start to finish to make these hash browns air fryer style!

And, honestly, I think these homemade hash browns taste even better than the pan-fried kind. They're incredibly flavorful, crisped to golden perfection, and they have a tender inside for a hash brown texture like no other.

Oh, and as a bonus, they freeze super well, so you can have these delicious hash browns on hand for a quick breakfast, brunch, or even dinner side for months at a time!

Also, my favorite thing to eat with these air fried hash browns is this homemade McGriddle or egg McMuffin. It is a classic McDonald's breakfast but so much healthier and so much tastier.

And if you want some more inspiration for what to eat these air fryer hash browns with, I'll go over some of my favorite recipes later on.

Ok, so these hash browns are made with simple ingredients, but the results are extraordinary.

Now, if you have to run to the store to grab some potatoes, make sure to pick up a big bag. Then, you can put them to good use and make this Instant Pot Potato Salad or Clam Chowder next!

How to Make Hash Browns In Air Fryer

As I already mentioned making these air fryer hash browns is as easy as it gets.

All it takes is a little prep work, some passive cooking, and you'll have about 6 large hash browns to feed the whole family!

So, without further ado, let's get to cooking!

Next, shred the potatoes using a box grater, and place the shredded potatoes in a strainer. Then, press on them against the strainer to remove as much water as possible - do not skip this step! It's the key to making the potatoes turn into super crispy hash browns.

Now, put the shredded potatoes in a bowl and peel the onions.

Then grate the onions with the box grater, add them to the bowl of potatoes, season with salt and pepper, and mix everything together.

Once the homemade hash brown mixture is ready, spray the air fryer basket with olive oil spray or baking spray.

Then, use a large spoon to help make uniform patties - you can scoop the shredded hash browns with the spoon and form them right in the air fryer to make it easier.

Finally, serve these air fryer hash browns with anything you want and enjoy!

What to Eat with Hash Browns

One thing I love about hash browns is that they are extremely versatile. You can serve them with so many delicious meals for breakfast, brunch, or even dinner!

Here are some of my favorite recipes to eat them with:

No matter how you eat them, these air fryer hash browns are an excellent addition to any meal.

How to Store Leftover Hash Browns

These air fryer hash browns are so good that I don't usually end up with any leftovers - my family finishes them off in a flash!

But if you do have leftovers, they store, and reheat super well.

You can store the hash browns in an airtight container in the fridge for up to 5 days. Just make sure they've fully cooled before storing.

And if you want to keep them for even longer, you can store the hash browns for up to 3 months in the freezer! To freeze, put them on a baking sheet to flash freeze, and once they're frozen, transfer the frozen hash brown patties to airtight containers or freezer-safe bags.

Then, for reheating, you can either start from frozen hash browns or thaw in the fridge.

You can reheat hash browns in a variety of different ways for that warm and toasty, freshly cooked experience.

The first method is to use the air fryer. Just preheat the air fryer to 400°F for 5 minutes and cook for just 1-2 minutes - or until they reach your desired temperature.

Another way is to use the oven - wrap the homemade hash browns in aluminum foil and cook in the oven at 400°F (205°C) for around 10 minutes.

And the quickest method - but not the best - is in the microwave. Put the hash browns on a plate in a single layer. Reheat for about 30 seconds on each side or until warm. However, if you're starting from frozen, you will have to increase the time.

Once you make this air fryer hash browns recipe, I have a feeling it will become one of your favorite air fryer breakfast recipes. I mean, they're the crispiest hash browns you can make in the air fryer, and making hash browns has really never been easier!

My family absolutely loves 'em, and I love how easy they are to whip up. They especially come in clutch on busy weekend mornings.

Anyway, I hope you like these air fryer hash browns as much as we do.

If you give them a shot, let me know what you think about them in the comments.

By the way, if you want to try making some more air fryer recipes, we have a ton on the blog you can try next!

Check out these air fryer recipes: 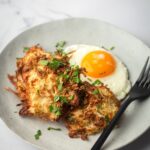 Crispy on the outside, perfectly soft on the inside, these air fryer hash browns are a healthier version of this popular breakfast and brunch side. And all you need to make these homemade hash browns is a few simple ingredients and just 15 minutes!