These vegan donuts are super soft, oh so cakey, and they have an old-fashioned donut texture. And each one is topped with a vanilla glaze that makes these donuts absolutely dream-worthy. Plus, these baked donuts only take 10 minutes!

This vegan donut recipe is the ultimate pick me up and makes for the perfect breakfast, snack, or dessert.

And, let's be real, donuts are, without a doubt, one of the best ways to start your day - they pair perfectly with a cup of coffee, you can eat them on the go, and are just so satisfying to have for breakfast.

Seriously, these vegan donuts (also spelled vegan doughnuts) are so good that it will be hard to believe they're not from a bakery.

On top of that, they're made with household ingredients and come together in just 20 minutes!

Oh, and who said donuts couldn't be healthy?

Well, this recipe gives you the option to make sugar free donuts!

Plus, we'll be baking our donuts instead of frying them - making them extra, extra healthy.

By the way, if you're looking for a vegan breakfast option with a savory flavor, I recommend my vegan biscuits and gravy recipe. You can have it done in under 30 minutes, and it is leftovers taste great too.

Ok, so the best part about these baked donuts might be they are made with all common household ingredients - odds are you have everything you need to make this recipe!

That said, here's what you'll need for the donuts:

And for the donut glaze:

The only ingredients that you might not already have are red food coloring and sprinkles. And these are totally optional - they are just used to give these vegan donuts a bakery-like look. Either way, they will be just as delicious!

Also, I actually use a lot of these same ingredients to make my vegan waffles. They're just as quick and easy to make as these vegan donuts, so I highly recommend trying them after this recipe.

As I mentioned earlier, one of the ways you can turn these into healthy donuts is by making them sugar free - and this is super easy to do.

You will just have to swap out the granulated sugar and confectioners sugar for a sugar-free sweetener.

Swerve measures out with sugar at a one-for-one ratio, and it has the same sweetness as sugar - making it the perfect substitute.

Another sugar substitute you can use is monk fruit sweetener, specifically Lakanto's. You can use the classic white in place of granulated sugar and powdered for the confectioners sugar. Also, this sweetener also measures out with sugar on a one-for-one ratio.

VEGAN SUBSTITUTES FOR THESE DONUTS

As you can see, for this recipe, we'll be using plant-based milk and coconut oil in place of the milk and butter used in regular donut recipes.

My go-to plant milk for this recipe - and most of my vegan recipes - are soy milk and almond milk. Both have a naturally sweet and mild flavor that works well in vegan treats like these donuts.

And since we're already using sugar and vanilla in the donuts and glaze, I suggest using unsweetened and unflavored soy milk or almond milk to keep the flavors in the recipe balanced.

Now, as I mentioned, we will be using coconut oil in place of butter, and that is really the only difference between these and regular donuts.

The coconut oil will give these donuts their slightly hard outer texture that classic old-fashioned donuts have. And the hard surface with the cakey inside is what makes these donuts so irresistible.

Now, I've talked about this a few times before, but it's worth mentioning again - coconut oil comes in two different kinds - unrefined and refined.

Unrefined coconut oil will add a hint of sweetness and coconut flavor to your recipe - and this will pair well with the other flavors in this donut recipe.

But if that's not something you want for your vegan donuts, refined coconut oil – which has no coconut flavor - also works perfectly.

And if you don't have coconut oil available - or don't want to use it - you can also use vegan butter in its place. Vegan butter and coconut oil substitute for another on a one-for-one basis, so you'll use four tablespoons regardless.

As I mentioned earlier, we'll be baking the vegan donuts in the oven instead of frying them. I decided to go this direction for a few reasons:

Also, baked donuts are a great option for at-home cooking because they are quicker to make than frying, and much less clean-up is involved.

Plus, I think that baked donuts are just as delicious as fried donuts! And after you make this recipe, you'll see why.

HOW TO MAKE VEGAN DONUTS

Now that we've covered the ingredients and substitutions let's get into the recipe!

You'll only need about 20 minutes to make 6 glazed donuts, and the recipe has just three steps: making the donuts, making the glaze, and putting the two together.

Yup, it's that simple!

With that said, it will take at least 30 minutes for the glaze to set and the donuts to cool down. So give yourself a little extra time if you want to serve these for breakfast!

Since the donut batter comes together really quickly, you'll want to start by preheating your oven to 400°F (200°C).

You can also get out your donut tray and set it aside. With that said, I HIGHLY recommend getting/using a silicone donut tray. The donuts will easily slide out of the silicone tray, and they're so simple and easy to clean.

And trust me on this one - I used to own a non-stick donut tray, and it was the worst. The donuts stuck to the tray half of the time - so pretty much the opposite of "non-stick." So save yourself the frustration and invest in a silicone tray.

Anyway, I digress, back to making the donuts.

After that, pour the wet ingredients into the dry ingredients and combine until you've formed a batter.

Next, you'll want to generously coat the donut tray with baking spray.

Now, after the donut tray is filled, pop it in the oven and bake for 10 minutes.

You'll know the donuts are ready when you can stick a toothpick into them and it comes out clean.

While the donuts are baking in the oven, you can start making the glaze.

This step is super simple and only takes about a minute. All you have to do is combine all the glaze ingredients - sugar, plant milk, vanilla, and food coloring - in a bowl and mix them together.

The consistency should be slightly runny but thick enough to cling to the donuts. If your glaze is too runny, you can add a little extra sugar. And if it is too thick, you can add some more plant milk.

Now for our last step, glazing the donuts. To do this, dip the top of the warm donut into the vanilla glaze and then top with sprinkles.

As I mentioned, the glaze will need some time to set, so let the glazed donuts cool on a wire rack for 30 minutes.

After they are cooled and the glaze has hardened, you can dig in!

Ok, so these donuts are so good, you'll want to make sure you have some saved for the week. And if you want more than half a dozen donuts, you can easily double or triple this recipe.

As far as storing them goes, you can store the donuts in an airtight container or sealable bag at room temperature for 2-3 days, in the fridge for up to a week, or in the freezer for up to 3 months.

These vegan donuts are such a tasty way to start your day.

Honestly, when I have these donuts on hand, I fly out of bed in the morning.

And what's great about these donuts is you don't only have to eat them for breakfast - they can also be enjoyed as a mid-day snack or vegan dessert - like these vegan oatmeal cookies.

Anyway, as always, we hope you enjoy these vegan donuts as much as we do. If you try them, definitely tag us on Instagram! We love seeing your recreations. 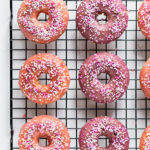