These fried pickles are super crispy, salty, and filled with flavor. They taste just like the ones you'd get at Zaxby's, Texas Roadhouse, or Buffalo Wild Wings. Honestly, they're just one of the most irresistible snacks or appetizers you can make that everyone will love. Plus, this fried pickles recipe is so easy to whip up - it takes less than 20 minutes from start to finish to make 'em.

As I mentioned before, the entire recipe takes under 20 minutes, and the process of making them is as simple as it gets. And the results are bangin'. You end up with crunchy pickles that are tangy, salty, and oh-so-crunchy.

And, for an even better experience, I included a dipping sauce recipe to pair with 'em. And, let me tell you, it's a match made in heaven. The dipping sauce also goes really well with these fried jalapeños!

Oh, and if you don't want to fry the pickles in oil, I included an air fryer fried pickles option too.

These deep fried pickles are actually made with super common ingredients. And the dipping sauce is too!

Anyway, here's what you'll need for the fried pickles:

And for the fried pickle dipping sauce:

The sauce for this recipe pairs really well with these corn nuggets. So if you want the ultimate appetizer platter, make those along with these fried pickles!

How to Make Fried Pickles

Now that you have everything you need for this recipe, it's time to make pickles fried to perfection.

By the way, feel free to double, triple, or quadruple this recipe to make more!

Now, get out the ingredients, and let's get cooking!

First, put the flour, cajun seasoning, oregano, salt, and pepper in a bowl and mix them until they're combined.

Next, put each pickle in the bowl and completely cover each side with the mixture. Pressing the pickle into the mixture works well to do this.

After you coat each pickle, put it on a plate until all of them are good to go.

Then heat the oil over medium-high heat until it reaches 350°F (180ºC). And make sure the oil is hot enough before you start frying the pickles!

Next, either add a few pickles to a frying grid basket or put them directly in the pan and submerge the pickles in the oil.

Fry the pickles for a few minutes until golden, then flip and fry on the other side until all of the pickles are golden brown.

Then, put the dill pickle chips on a plate lined with paper towels or a drying rack to drain the excess oil.

Once the pickles are fried to perfection, you can make the dipping sauce.

To do this, add all of the sauce ingredients to a mixing bowl and mix them together until a smooth sauce forms. Then serve the pickles with the sauce for dipping and enjoy!

Alternatively, you can serve them with classic ranch dressing or this tiger sauce if you want a little heat.

If you don't want to fry the dill pickles in oil, you can make air fryer fried pickles! They turn out just as crunchy and just as delicious.

For air fried pickles, preheat the air fryer to 400°F (205°C). Then follow all of the steps above until the pickles are ready to be fried.

When the pickles are ready, coat the air fryer basket with baking spray and place the pickles in a single layer. By the way, you may have to cook them in batches depending on the size of your air fryer.

Cook for 10 minutes flipping the pickles halfway through, then when they're golden and crispy, serve with the fried pickles dipping sauce and enjoy!

How to Store Fried Pickles

With a treat like this, it's hard to believe you'll have anything leftover. And although these pickles are best enjoyed right after you make them, you can store any leftovers you have.

To store the fried pickles, transfer them to in an airtight container, and they'll last in the fridge for about 3 days. Just make sure they've cooled completely before storing.

And the cajun dipping sauce will last a little longer - up to 5 days - so you can store any you have left in an airtight container in the fridge too.

How To Reheat Fried Pickles

Then, if you want to reheat the pickles, you can put them in a skillet with a little oil over medium heat for a few minutes on each side until warm.

Even if you aren't a huge fan of pickles, you'll love this fried pickles recipe.

These pickles are perfectly tangy and salty with the best savory flavor and crunchy texture.

I've got a feeling uou'll want to make another batch as soon as they're gone! That's what always happens in our house anyway.

Well, I hope you enjoy these fried pickles as much as my friends and family do.

If you make the recipe, let me know what you think in the comments below

If you love how indulgent and delicious fried food is, we have some more recipes on the blog I think you'll like!

Give some of these recipes a try next: 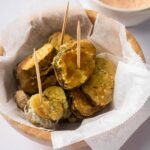 These fried pickles are super crispy, salty, and filled with flavor. They taste just like the ones you'd get at Zaxby's, Texas Roadhouse, or Buffalo Wild Wings. Honestly, they're just one of the most irresistible snacks or appetizers you can make that everyone will love. Plus, this fried pickles recipe is so easy to whip up - it takes less than 20 minutes from start to finish to make 'em.

Salt and Pepper to taste

Salt and Pepper to taste