These air fryer empanadas have a cinnamon apple filling and are basically mini apple pies! They're pockets of buttery apple cinnamon deliciousness wrapped in a flaky and crispy empanada crust with caramelized cinnamon-sugar glaze. So if you've been looking for the best apple dessert, this is it!

This apple empanadas recipe is hands down one of the tastiest desserts you can make in an air fryer.

They remind me a lot of apple pie, but I think they're even better!

These air fryer empanadas are small enough to eat on the go or to pack in your lunchbox. And, of course, they are a delicious snack or after-dinner dessert at home.

With that said, what I love about these apple empanadas is they have the perfect crust to filling ratio. So they aren't too doughy, and each bite starts with a crispy crunch and ends with a soft cinnamon apple finish.

And making these empanadas in the air fryer is by far the easiest way! Seriously, it only takes 45 minutes to make 24 of these heavenly little apple empanadas.

Oh, and this recipe is super adaptable too. If you don't want to cook the empanadas in air fryer, you can bake them in the oven or fry them on the stovetop. Just like my Chicken Empanadas and Beef Empanadas!

What makes this empanadas recipe even better is that all you need to make it is a handful of simple ingredients.

Here's everything you'll need to make the apple empanadas:

And for the finishing touches:

As you may have noticed, you'll need empanada discs to complete this recipe. And we have an incredible Empanada Dough Recipe that takes these to the next level, so you'll want to whip those up really quick first!

Oh, and by the way, this Apple Butter Recipe uses many of the same ingredients as these apple empanadas, so you may want to check that out next!

APPLES TO USE FOR THESE EMPANADAS

So, if you want to get the best results for your apple filling, you'll want to use apples that hold their shape and flavor after long cooking times.

With that said, some apples you should probably skip are Red Delicious, Golden Delicious, and Gala because these tend to turn mushy or lose their flavor as they cook.

HOW TO MAKE APPLE EMPANADAS IN THE AIR FRYER

Ok, so 45 minutes is all you need to make 24 of these addictive apple empanadas.

And if you have a little extra time on your hands, I definitely recommend doubling or tripling the recipe so you have extras you can freeze for later.

Now, let's dive into the recipe!

First, we'll prepare the apple filling. So, take out a pot and heat it over medium-high heat.

Then add in the butter, chopped apples, brown sugar, vanilla extract, and cinnamon.

Stir these ingredients to incorporate everything evenly, then let the filling mixture cook for 25 minutes.

Then, add about 1 tablespoon of filling to the center of each empanada disk and gently fold the empanada in half - sealing the edges with a spoon.

Next, to top the empanadas off, mix the cinnamon and sugar in a bowl, brush the melted butter on each empanada, and sprinkle some of the cinnamon sugar over them.

So, once your empanadas are ready, take the tray out of your air fryer and spray it with an even coating of oil.

By the way, if you're using a large air fryer, you can cook your empanadas in bigger batches as long as they aren't touching each other in the basket and have room to lay flat.

Finally, serve your apple empanadas with a side of caramel syrup for dipping and enjoy!

HOW TO MAKE APPLE EMPANADAS IN THE OVEN

As I mentioned earlier, you can also bake these empanadas in the oven.

Arrange the prepared empanadas evenly on the sheet and bake for 20 minutes or until the outside is golden brown.

HOW TO FRY APPLE EMPANADAS ON THE STOVETOP

Of course, you can also fry your empanadas on the stovetop.

Take out a large pot or deep pan and fill it with just enough oil to cover your empanadas completely or halfway.

Now, heat the oil to 365°F (180ºC). Or, if you don't have an oil thermometer, stick a chopstick or the end of a wooden spoon into the oil - you'll know the oil is ready when bubbles form around the wood.

Then, add the empanadas a few at a time, and cook them for 5 minutes or until golden brown on both sides.

Oh, and if you're shallow frying your empanadas, you'll want to turn them over after 3 minutes to get both sides evenly cooked.

Then, place them on a drying rack or a plate lined with paper towels to drain any excess oil before serving.

So, naturally, you'll have some leftovers. Unless you're making them for a party, of course - in that case, they'll be gone in a flash!

Anyway, these apple empanadas make great leftovers and can be either refrigerated for 3 days or frozen for up to 3 months in an airtight container.

If freezing, put them on a baking sheet in the freezer until solid, then transfer them to an airtight container.

By the way, you can even freeze the uncooked empanadas for up to 3 months and cook them whenever you want! Just remember to separate the empanadas with sheets of baking paper so they don't stick to each other.

So, now you know how to make apple empanadas from scratch!

These dessert empanadas make an amazing fall and winter treat, but honestly, I could have them any time of year! They're just so tasty with the warm apple cinnamon filling and crunchy dough.

Everyone always loves them - seriously, make these for your family and friends, and you'll be everybody's favorite person! And when they ask you for the recipe, you'll know where to point them (wink, wink).

Anyway, I hope you enjoy these apple empanadas as much as my family and I do. If you try them let me know how they go for you in the comments below!

If you're looking for more delicious and easy dessert recipes, we have a ton on the blog we think you'll like. 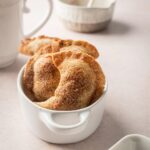 These air fryer empanadas have a cinnamon apple filling and are basically mini apple pies! They're pockets of buttery apple cinnamon deliciousness wrapped in a flaky and crispy empanada crust with caramelized cinnamon-sugar glaze. So if you've been looking for the best apple dessert, this is it!