This pumpkin ice cream recipe is insanely creamy and filled with all the pumpkin spice flavors you know and love! Then to make it even better, this ice cream has swirls of delicious homemade cinnamon syrup throughout. And it only has to freeze for about 2 hours before eating!

Step aside pumpkin pie - this pumpkin pie ice cream might be the best thing you can make during the fall.

It literally tastes like pumpkin pie but in rich and creamy ice cream form.

Seriously, this pumpkin spice ice cream has hints of cinnamon, ginger, and brown sugar that compliment the overall pumpkin flavor so well. And topping it off with the 10-minute cinnamon syrup makes this dessert recipe a treat like no other.

My family makes this recipe pretty much once a week during the fall, and I have a feeling you and your family will do the same after you get a taste.

Yeah, this homemade pumpkin pie ice cream is that good. And along with being insanely delicious, it is also super easy to make!

So, to make this pumpkin ice cream, you will need just a few simple ingredients.

And if you've already stocked up on pumpkin puree for the season, I wouldn't be surprised if you already have everything else you need in your kitchen.

Here is what you'll need for the ice cream:

And for the cinnamon syrup:

Now, if you don't have a couple of these ingredients, you'll want to go to the grocery store ASAP and stock up on everything. I have a feeling you'll want to make this pumpkin ice cream more than once.

Oh, and make sure you pick up some extra pumpkin puree to make this Pumpkin Mousse and Pumpkin Custard Pie next!

HOW TO MAKE PUMPKIN ICE CREAM

So, as I mentioned, the process of making this pumpkin pie ice cream is actually super easy.

The first thing you will do is freeze the drum of the ice cream maker overnight, so you will need to do a little planning for when you want to make this deliciousness.

Then, when you're ready for some pumpkin spice ice cream, put all of your ice cream ingredients in a bowl and mix them until well combined.

Next, assemble your ice cream maker - if you haven't done so already - and add the mixture to it.

Then let the machine run for about 30 minutes, or until the ingredients become thicker and creamier.Now, when you've got that consistency going on in the ice cream maker, you'll want to transfer the ice cream to the freezer, and freeze for at least 2 hours.

After you make the ice cream, you can get started on the cinnamon syrup.

First, add the water, sugar, and cinnamon to a pot on your stovetop and bring everything to a boil.

Then once it boils, cook for about 7 minutes or until the mixture reduces in half.

After this happens, let it cool while the ice cream finishes freezing.

By now, the ice cream should have frozen for at least 2 hours.

And when you are almost ready to eat it, take the ice cream out and add the cinnamon syrup to it, making swirls in the ice cream.

Then put the ice cream back in the freezer and freeze for another 30 minutes before serving.

Finally, scoop your ice cream into bowls and enjoy!

So, this recipe will make about 6 scoops of ice cream, just the perfect amount for a family fall dessert.

If you don't finish off the ice cream after making it, you can store it for up to 2 weeks in the freezer for the best quality.

And to store your ice cream, you have several different options. Some of my favorite ways to store it are in:

With that said, for a full breakdown on how to store your ice cream check out this article.

This pumpkin ice cream recipe will forever change your fall for the better.

It is just the creamiest, most delicious homemade ice cream. The pumpkin spice flavors and cinnamon-sugar syrup create an ice cream that you can't find at the stores - or get anywhere else.

So, whether you're making it for a weeknight dessert, holiday celebration, or just a mid-day treat, anytime is a good time to make this pumpkin ice cream. At-least I think it is.

And, for what it's worth, my family seriously can't get enough of this ice cream during the fall season, and I hope you enjoy this pumpkin pie ice cream as much as we do!

As always, if you make it, leave a comment below and let me know what you think.

More Dessert Recipes To Try Next

If you enjoyed today's homemade ice cream recipe, you might want to try one of these homemade dessert recipes next:

Pumpkin Ice Cream Recipe That Tastes Like a Pumpkin Pie 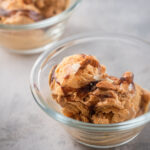