If you're looking for the best apple crisp recipe without oats this is it! It's made with tart green apples, brown sugar, cinnamon, and a delicious crumbly topping. And the best part is that this easy apple crisp recipe takes just minutes to prepare!

It's apple picking season, and this apple crisp without oats is the most delicious recipe you can make with your freshly picked apples.

Seriously, it has all of the fall vibes. From the warm, tender apple filling, to the buttery brown sugar cinnamon crumble topping, this crisp has it all!

Serve it warm with a scoop of vanilla ice cream, and you'll have yourself the ultimate comfort food treat.

Now, along with how absolutely delicious this apple crisp without oats is, it's also incredibly easy to make. Seriously, all you have to do is a little mixing, and then the oven will take care of the rest.

This easy apple crisp recipe is actually made with super simple ingredients that you probably have at home already.

If not, a quick trip to the grocery store is all you need, and you'll be good to go.

Here's what you'll need for the warm apple crisp filling:

And for the delicious topping:

Now, since this recipe uses 4 apples my wife and I usually end up making it after we go apple picking in the fall. There's just nothing better than using some farm-fresh apples to make this crisp. But, you can use any store-bought apples that you want! I like using green apples for a slightly tart taste, but feel free to use any kind.

Oh, and if you've got some leftover apples that you don't know what to do with, give this apple butter recipe or these apple empanadas a shot next!

How To Make Apple Crisp Without Oats

As I said before, this recipe is wonderfully simple to make.

It takes just one hour to make a family-sized apple crisp, and the majority of that time is baking.

So, let's not waste any more time and dive into the recipe!

First things first, preheat the oven to 350°F (180°C) and slice the apples into any sized slices that you want.

Next, grease a pie dish - or casserole dish - with baking spray or butter and put the apple slices in it. Then, add the brown sugar and toss the apples in the brown sugar to coat them in it.

Once they're coated, put the apples in an even layer in the dish.

Now onto the crisp topping. Start by adding the flour, brown sugar, cornstarch, cinnamon, and salt to a bowl and give them a mix.

Then, add the lemon juice, vanilla extract, and cubed butter to the bowl and use your hands - or a spatula - to mix until the ingredients form into a sandy, crumbly topping.

Now top the apples with the apple crisp topping. And you'll want to make sure you put it evenly over the apple slices when you do.

Then, bake the apple crisp for about 40 minutes or until it's golden brown.

Finally, serve warm by itself or with a scoop of vanilla ice cream, and enjoy!

What To Serve Alongside Apple Crisp

As good as your apple crisp will taste on its own, you can also pair it with a little something extra for an elevated flavor.

Here are some ideas:

How To Store Apple Crisp

This apple crisp recipe makes enough for about 6 servings.

So, if you're serving it to a group of people, there's a slim chance that you'll have any leftovers.

But, if you do, you can either cover the baking dish tightly with plastic wrap or transfer the leftovers to an airtight container. Then, you can store it at room temperature for 2 days or in the fridge for up to 5 days.

Alternatively, you can freeze your apple crisp and store it for up to 3 months. Just make sure that it has cooled completely before freezing in an airtight container.

How to reheat apple crisp

To reheat your apple crisp without oats, the quickest way is to pop it in the microwave for 10-15 seconds.

Alternatively, you can put it back in a baking dish in the oven at 350°F for about 10 minutes or until hot.

Well, that's how to make apple crisp without oats.

Out Of all the apple desserts out there, this apple crisp is hands down the best one. It's so simple yet has the most delicious texture and flavors.

Whether you serve up a slice of this apple crisp with a big scoop of vanilla ice cream or just eat it warm out of the oven, I have a feeling you're going to fall in love with it. And everyone else who tries it will too!

As always, if you give this recipe a try, leave a comment below and tell me how it went!

If you liked this easy apple crisp recipe, we have a ton of other dessert recipes on the blog that I think you'll like too!

Try making one of these next: 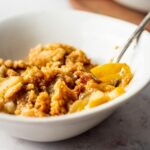 This apple crisp without oats has all of the warm, comforting, and delicious apple crisp flavors that you'd want. It's made with tart green apples, brown sugar, cinnamon, and a delicious crumbly topping. And the best part is that this easy apple crisp recipe takes just minutes to prepare!