If you're like me and Reese's peanut butter cups are your favorite sweet treat, then this delicious dessert is going to blow your socks off!

The best part about this Reese's peanut butter pie is it requires minimal prep time, and it's actually super easy to make, even if you've never made a homemade pie before! It's honestly as easy as going to the store to buy a pie, and it's so much tastier made at home.

This peanut butter pie is ideal to bring to parties or serve as a Reese's Thanksgiving pie since it's such a crowd-pleaser, especially during the holiday season.

But with that said, it's equally terrific to serve as a simple after-dinner dessert for the family any time of year!

Seriously, it's such a hit that you might want to make two or three pies! Plus, it keeps really well in the refrigerator, and it might even taste better the days after you make it.

Now, let's get down to business so we can make Reese's peanut butter pie!

There are only a handful of ingredients required to make this Reese's peanut butter cup pie. And you probably have a few of them on hand already! If not, just a quick trip to your nearest grocery store is standing between you and this Reese's Thanksgiving pie.

How simple is that?

Diving into the ingredients

As you can see this easy pie recipe uses a premade pie crust, but you can totally make one from scratch if you want as well.

No matter how you choose to make this pie, it'll be delicious!

By the way, if you love Reese's peanut butter cups, you have to make this chocolate peanut butter fudge next! It's made with two ingredients and is actually a great dessert to serve alongside this pie.

And if you want another Reese's cup style pie, you can make my other no bake peanut butter pie. It's basically like a giant peanut butter cups.

How To Make This Reese's Peanut Butter Cup Pie

So, as I mentioned earlier, the steps required to make this peanut butter cup pie could not any easier.

Also, just so you know, you can easily save time by making pouring the chocolate on top of the pie crust the night before, so it will have time to set in the fridge before making the pie. Doing that will cut down on some of the prep time.

Anyways, let's not waste any more time and get into how to make Reese's pie!

Then, grease a pie pan and lightly sprinkle the surface with flour - the flour ensures that the crust doesn't stick to the pie pan when serving.

Next, place the pie crust over the pie dish and pinch the edges with a fork to create crimps all around.

Now you'll need to pre-bake the pie crust. And to get that perfect golden color, bake the pie for about 15 minutes. Also, make sure to keep an eye on the crust as it cooks because you'll want to remove it from the oven as soon as it turns golden brown.

Once the pie crust is fully baked you'll want to allow it to cool completely.

While the chocolate on the pie crust is setting, you can prepare the homemade whipped cream.

To do that, beat the heavy cream in a mixing bowl with an electric mixer - or stand mixer - until stiff peaks start to form.

Once you have stiff peaks, take one cup out from the bowl for the peanut butter filling and put the rest of the whipped cream in the refrigerator.

So, to make the dreamy peanut butter mixture, you'll want to add the cream cheese, peanut butter, sugar, and the separated cup of whipped cream to a large mixing bowl.

Then, mix the filling with an electric mixer until it's fully combined and is smooth and creamy. Oh, and if you want to take it to another level, fold in some chopped peanut butter cups!

Now that the filling is ready, the chocolate should be slightly hardened on top of the pie crust.

So, take the pie crust out of the refrigerator and add all of the peanut butter mixture on top. Then, smooth it out with a rubber spatula, so it evenly covers the pie.

Now you can add the whipped cream on top of that and spread it out evenly over the filling.

Lastly, add the chopped peanut butter cups on top of the whipped cream.

Finally, either slice the pie and serve it immediately or store it in the fridge if you are planning on eating it later.

How To Store Your Chocolate Peanut Butter Pie

This rich and creamy Reese's peanut butter cup pie will make about 8 decent-sized slices. And if you're serving it at a party, on Thanksgiving, or even just after a family dinner, you may not have any leftovers.

But, if you're lucky enough to save some, this pie stores super well in the fridge. Either cover the pie dish that the pie is in or transfer the leftovers to an airtight container. Stored this way it will last in the fridge for about 4 days.

However, if you want to store it for longer and enjoy it as a frozen treat, you can also freeze the pie for about 2 months. To freeze peanut butter pie, transfer it to an airtight container or wrap individual slices tightly with plastic wrap and put them in a freezer-safe bag.

What is in a Reese's pie?

Is there a Reese's pie?

Yes, there is absolutely a Reese's pie, as you've seen with this recipe. Now, a Reese's pie can take on many forms, like having an extra peanut butter layer instead of chocolate or having the pie on top of a graham cracker or chocolate crust. But, of course, I think that this is the best one. And I know I'm a little biased, but I guess you'll have to try it for yourself and see if you agree!

Well, that is how to make Reese's pie with simple ingredients and in just a few basic steps. This honestly is one of the easiest pies and no bake desserts you can make.

It's sure to be the star of the show if you're serving it at Thanksgiving, a party, or just after a family dinner.

Anyway, I hope I've convinced you to make this chocolate peanut butter pie one of your go-to desserts.

If you give it a try, leave a comment below and let me know how what you think!

Oh, and as always, for more delicious recipes be sure to check out our Youtube channel and Instagram page! We post new ones on them daily.

If you liked this Reese's pie, we have a ton of dessert recipes that are just as delicious! 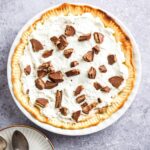