This copycat McDonald's hash browns recipe is as legit as it gets. These hashbrowns are crispy on the outside, buttery on the inside and they're seasoned to perfection. Plus, they're incredibly, incredibly easy to make. In fact, just 3 simple steps and 15 minutes are all these take to make. So, say goodbye to the drive-thru line, and say hello to some awesome homemade hashbrowns!

I don't know about you, but I think McDonald's hash browns are one of their best menu items. And although they're fantastic from the restaurant, I think that my take on them is even better made at home!

Seriously, after you give these simple and delicious homemade hash browns a shot you'll be hooked. Atleast that's been the case for me. I've made them for breakfast almost every morning this week so far.

Also, what I love about making these McDonald's hash browns at home is that there aren't any unnecessary ingredients added to them. Things like hydrogenated soybean oil, sodium acid pyrophosphate, or "natural beef flavor" have no business in my breakfast!

Anyway, another reason to love this recipe is how easy it is to make. As I mentioned a second ago, there are only about 15 minutes and a couple of easy ingredients standing between you and this signature breakfast side.

By the way, if you want to make a complete Mcdonald's breakfast out of these hashbrowns all you have to do is pair 'em with this egg McMuffin recipe or this McGriddle recipe. And if you want something sweet to go with the savoriness of these hash brown patties, you can make these McDonald's pancakes too.

Either way, you'll have the perfect breakfast combo that everyone is sure to love. Your family might think you actually waited in line at the drive-thru just to get everything.

Anyway, now let's get into the ingredients you'll need to make this McDonald's hash brown recipe!

Alright, so you'll only need 5 ingredients to make these delicious McDonald's hash browns. And while there are a few more ingredients in this recipe than in traditional hash brown recipes, they're well worth it.

With that said, here's everything you'll need to make this easy hash browns recipe:

As for the oil, any neutral high-heat oil can be substituted for vegetable oil, such as canola oil, peanut oil, safflower oil, avocado, or macadamia nut.

As for the cheese, I think mozzarella works best, but you can use anything you want, like cheddar or even pepper jack.

Oh, by the way, you can use almost all of these ingredients to make these air fryer hash browns, another one of my favorite hash brown recipes! So, if you want to put an air fryer twist on this recipe give that a look.

How To Make McDonald's Hash Browns

Again, making a homemade hash brown like the one from McDonald's could not be any easier. I mean, just 3 steps are all you have to follow to make 'em. The whole process basically comes down to just peeling & cutting, forming and frying.

How easy does that sound?!

Seriously, even if this is your first time making hash brown patties from scratch, you'll find this recipe to be a really simple one to make. And, honestly, after you've made these hash browns once, you'll have an easy time making them again and again.

Anyway, let's stop wasting time and get into the recipe!

Step 1: Peel and Cut The Potatoes

First, you'll start by peeling and cutting the potatoes into very, very thin cubes. Start by slicing the potato in half and then in vertical thin strips-like shoe string fries. Then cut them horizontally to make them into thin cubes.

Next, transfer the cut potatoes to a mesh sieve - or strainer - and press them so they release most of their excess liquid.

Next, mix the potatoes with the salt and cornstarch in a bowl. Then, transfer ¼ cup of the hashbrown mixture to a sheet of parchment paper.

Flatten the potatoes, making a rectangle, and top with the cheese. Top with 2-3 tablespoons more of the cut-up potatoes and fold the parchment paper over top to help you form the patties.

Finally, repeat these two steps with the rest of the hash brown mixture until you have about four big patties.

Now, heat a non-stick skillet to medium-high heat and coat the surface with the oil. Then, transfer the hashbrowns to it and cook them for a few minutes on each side until they're golden brown.

Serve them garnished with fresh parsley and pair them alongside any other breakfast recipes you want!

How To Store McDonald's Hash Brown

As you know, this recipe for McDonald's hash browns will make about 4 patties. And they actually store pretty well, so don't worry if you're not able to finish all of them, or decided to double the recipe.

With that said, you can store the cooked potatoes in the fridge in an airtight container for up to 5 days.

By the way, if you want to keep the hash browns for even longer, you can freeze them in an airtight container - or freezer-safe bag - for up to 10 months. This is the method I usually go with. Since I love making/eating these McDonald's hash browns so much, I always make an extra batch when I make 'em. Then, I just freeze the extra batch so it's ready to go whenever I need a quick side for breakfast.

Either way, I recommend lining each patty with parchment paper to prevent them from sticking or falling apart.

How to Reheat Hash Browns

To reheat, the quickest way is to simply place them in the microwave and heat them in 20-second increments until thoroughly heated.

Alternatively, you can place your hash brown patties on a baking sheet lined with parchment paper - or foil - and heat at 350°F for 15-20 minutes or until thoroughly heated. This is the best method if you want them to crisp back up.

Well, that's how to make McDonald's hash browns at home!

This hash brown recipe honestly couldn't be any closer to the real thing. The crisp crunch on the outside of them, the buttery middle, and the saltiness you know and love in each and every bite, it's all here.

As always, if you give this recipe a try, be sure to leave a comment below and let me know how it went.

McDonald's Hash Browns Recipe Made In Only 15 Minutes 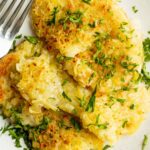 This copycat McDonald's hash browns recipe is as legit as it gets. These hashbrowns are crispy on the outside, buttery on the inside and they're seasoned to perfection. Plus, they're incredibly, incredibly easy to make. In fact, just 3 simple steps and 15 minutes are all these take to make. So, say goodbye to the drive-thru line, and say hello to some awesome homemade hashbrowns!