This no bake banana pudding has layers of delightfully rich and creamy whipped pudding, crisp vanilla wafers, and sweet banana slices. It's an old-fashioned Southern dessert that'll have both kids and adults reaching for seconds!

THE BEST NO BAKE BANANA PUDDING

If you're looking for a simple last-minute dessert that'll impress the whole family, you can never go wrong with this delicious banana pudding.

It's an addictive combination of creamy, crunchy, and airy textures filled with the flavors of sweet banana and toasty vanilla. It's like biting into a banana-flavored cloud, but better.

The best part is, all you need is 4 simple ingredients and 10 minutes of prep to make it. Also, there's no baking necessary, so practically anyone - and everyone - can make it. And for that reason, it's a super fun recipe to make with kids! They can help create the layers that make this banana treat so good.

Honestly, the hardest part of this recipe is waiting for it to set in the fridge. But while you're waiting, you can whip up this Air Fryer Popcorn so you have something to snack on.

As I mentioned, it only takes 4 super easy-to-find ingredients to make this dreamy, easy banana pudding.

You can use homemade whipped cream for this recipe, but I prefer Cool Whip because it holds its shape a lot better and gives the pudding a wonderfully light and fluffy texture.

By the way, if you wind up with extra bananas leftover or your bananas are a little too ripe for this recipe, you can use them to make our 3 ingredient banana waffles!

HOW TO MAKE NO BAKE BANANA PUDDING

Again, this is a no bake banana pudding recipe so it's one of the easiest - not to mention one of the most fun - desserts you can make.

All you have to do is make the pudding, assemble the layers, and chill. No oven and no mixer required!

But don't let its simplicity fool you - it's always a huge hit at parties and potlucks. Oh, and kids absolutely love it.

STEP 1: PREPARING THE BASE

First, take out a 13 by 9 inch casserole dish - this is what I used. However, if you don't have a casserole dish in this size, you can also use two standard-sized loaf pans or a large trifle.

Then, slice 1 ½ - 2 of the bananas, and form an even layer of them on top of the vanilla wafers.

Next, make the vanilla - or banana - flavored pudding based on the package instructions.

Once the pudding is ready, gently fold in the tub of Cool Whip until the pudding and Cool Whip are well-combined. And be careful not to overmix it - we want it to be as airy and light as possible.

Ok, now pour half of the pudding mixture over the layer of sliced bananas, and use a rubber spatula to evenly smooth it out over the top of the sliced bananas.

Then, on top of that, place another layer of vanilla wafers followed by a layer of sliced bananas.

Next, pour the rest of the pudding mixture over the top and smooth it out.

Finally, crush 4-6 vanilla wafers and sprinkle them on top of the pudding.

Now for the hardest part of this recipe - waiting for it to set before you can dig into all that creamy deliciousness. And it will need to chill for atleast an hour before it will set.

Then, once the pudding has thickened up and you're ready to serve, take it out of the fridge, and enjoy!

HOW TO STORE BANANA PUDDING

This no bake banana pudding recipe is the kind of dessert that's best eaten fresh. Luckily it's effortless to make, so you can quickly whip up a batch whenever you're in the mood for it.

However, if you have some leftover and want to save it, you'll want to cover the dish with a lid or tightly seal it with plastic wrap. Stored that way you can store it in the fridge for up to 3-4 days.

Or, if you want to keep it for longer, you can store the pudding in an airtight container in the freezer for up to 2 weeks. With that said, if you're planning to do this, be sure to toss the bananas in lemon juice beforehand to prevent them from browning in the freezer.

Then, when you're ready to thaw the frozen banana pudding, just transfer it to the fridge, and let it soften overnight.

FAQS ABOUT THIS NO BAKE BANANA PUDDING RECIPE

WHY DID MY BANANA PUDDING NOT SET?

If your banana pudding doesn't set it's typically from not leaving it in the fridge long enough. The longer it chills, the more the pudding will set, so make sure to give it enough time in there.

How do you keep banana pudding from getting watery?

Using Cool Whip - like in this recipe - is the best way to keep the banana pudding from getting watery. The Cool Whip thickens everything up, and gives the pudding its light and airy texture.

HOW RIPE SHOULD MY BANANAS BE FOR BANANA PUDDING?

When making banana pudding you want your bananas to be ripe, but not anything more than that. They should be fully yellow but have no dark spots on them.

Well, that is how to make no bake banana pudding with a luscious, creamy texture and perfect vanilla-banana flavor.

Whenever I bring it to a party or get-together, I get so many requests from family and friends for the recipe. And, honestly, everyone is always surprised to find out how quick and simple it actually is!

Anyway, I hope you enjoy this no bake banana pudding recipe as much as I do. Be sure to let me know in the comments below if you make it and how it came out!

Oh, and if you want to try out another no bake recipe, these no bake cookies are a great one to make. All you need is a chocolate bar, butter, oats, and nuts!

And don't forget to check out our Youtube Channel for more delicious recipes. 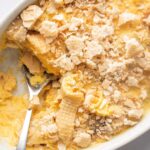 This no bake banana pudding has layers of delightfully rich and creamy whipped pudding, crisp vanilla wafers, and sweet banana slices. It's an old-fashioned Southern dessert that'll have both kids and adults reaching for seconds!