I don't know if there is anything quite as nostalgic as funnel cake. When I think of funnel cake, I think of getting a hot and fresh one on two paper plates from the fair.

And I was thinking about how much I miss eating this deliciousness the other day, so I created a keto version of a classic funnel cake.

Anyway, this homemade keto funnel cake gets fried up until it is lightly golden, and then gets topped off with a sugar-free powdered "sugar" that makes it melt away when you bite into it.

Honestly, this funnel cake is downright addictive, and it will be hard not to eat the whole thing. Which you can totally do since each serving has 0.75 NET CARBS!

Oh, and if you want another delicious recipe that is reminiscent of the fair, make this Instant Pot Popcorn to go with your keto funnel cake.

As far as ingredients go, this recipe has some very standard low carb ones.

In fact, I use the majority of these ingredients in a ton of other dessert recipes, like to make this keto lemon pound cake and these keto vanilla cupcakes.

Anyway, here's what you'll need to make this funnel cake:

KETO FRIENDLY INGREDIENTS TO USE

So, for the unflavored whey protein powder, you can use anything you want for this recipe. Just make sure that it has no added sugars and is low in carbs.

For the sugar-free powdered sugar topping, I used Confectioners Swerve, but you could also use Lakanto's Powdered Monkfruit Sweetener.

Now, if you are allergic or want a substitution for the almond flour, two other options you have are walnut flour and sunflower seed flour. Both can be substituted equally with almond flour and will work well in this recipe.

With that said, a flour you DO NOT want to use is coconut flour in its place. It is highly absorbent and will cause this funnel cake to be dry and fall apart.

HOW TO MAKE KETO FUNNEL CAKE

The process of making this funnel cake is super easy, and fun too!

It is similar to making these keto hush puppies, which, if you haven't tried yet, you definitely need to soon.

The first thing you will do is add all of your ingredients - except the coconut oil and confectioners swerve - to a large mixing bowl.

Then whisk these ingredients together until everything is fully incorporated and you have a smooth batter.

Next, transfer the batter to a piping bag with a large ½" tip. And if you do not have a piping bag, you can put the batter into the corner of a Ziploc bag and cut off the end, so it is about a ½" diameter.

Take out a large pan and put in your coconut oil. Heat the pan over medium heat until it reaches 350°F - if you do not have a thermometer to check the temperature, heat the oil for about 5 minutes before frying.

Once your oil is heated, slowly squeeze your batter into the oil in a circular motion. Fry the batter for about 2-3 minutes on each side until it is golden.

Then remove your funnel cake from the pan and transfer it to a paper towel-lined plate to drain the excess oil.

To finish up, sprinkle your hot funnel cake with as much confectioners swerve as you want and dig in!

This recipe makes 4 servings of funnel cake. And since you can eat all 4 servings for only 3 NET CARBS, it will be hard not to eat the entire thing!

But if you decide to save some for the next day, you can store your leftover funnel cake at room temperature in an airtight container for up to 2 days.

Then to crisp it back up, put it in a 350°F oven for a few minutes until warm.

This funnel cake is about as low carb as a keto dessert can get. Each serving literally has 0.75 NET CARBS! And it is pretty high in protein for a dessert too.

Check out the rest of the macros for 1 serving:

It doesn't get much better than this keto funnel cake when it comes to taste, texture, and keto friendliness.

Not only will you love this treat, but your kids will love it too and have no idea it is low carb and sugar-free!

I hope you enjoy this keto funnel cake recipe as much as I do. Make sure to leave a comment below if you make it - I'd love to hear what you think.

There's no doubt that this funnel cake is delicious. And I have a few more dessert recipes that I think you'll like too.

So I highly suggest you give these a try next: 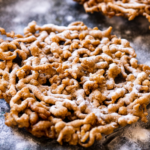 2 cups of coconut oil for frying