These keto cupcakes are super soft and fluffy, and topped with a sugar-free cream cheese frosting. And, not only are they easy to make, they're quick to make too. From start-to-finish these keto cupcakes take just 25 minutes to whip up. Best of all though, is the fact that each one of them has less than 2 NET CARBS! And, yes, that includes the keto frosting!

This recipe has everything you'd want out of a cupcake recipe, except all of the carbs.

Each one is light and fluffy, perfectly sweetened, and topped with a smooth cream cheese frosting.

So, if you're craving something cakey with vanilla flavor, look no further than these easy keto cupcakes.

And, as I mentioned before, not only are they super low carb - under 2 NET CARBS per serving - they're super easy to make too! All you need is just a few common keto friendly ingredients, and 20 minutes.

Yep, it's that simple to make these!

By the way, if you're looking for more delicious keto cake recipes to satisfy your sweet tooth, you'll want to check out this keto lemon pound cake and keto chocolate cake. Both recipes are an absolute hit if you love cakey desserts.

That said, let's jump into the ingredients you'll need to make these keto vanilla cupcakes.

So, for this keto cupcake recipe, we will be using all staple keto ingredients.

And, odds are, you already have everything you need to make this recipe!

Here's what we'll be using:

Pretty common stuff, right? And I use the majority of these ingredients for some of my other recipes like to make these keto pancakes and this keto bread pudding.

Anyways, as far as frosting goes, I like to top my keto cupcakes with this 4 ingredient keto cream cheese frosting. It has almost 0 carbs a serving, and it's incredibly easy to make too.

However, if frostings not your thing, you can always skip it.

FLOURS TO USE FOR YOUR KETO CUPCAKES

So, instead of using the white or wheat flours as you'd find in regular cupcakes, you'll notice we're using almond flour instead.

Almond flour is super low carbs, and it's the perfect base ingredient for making these delicious vanilla keto cupcakes grain free.

That said, my go-to almond flour is this one by Blue Diamond Blanched Almond Flour. It's the highest quality one I've used, it has the lowest carb count, and the price is the best that I've seen for almond flour too.

Now, I love using almond flour as a keto substitute for regular flour because you can barely taste the difference, and it has the closest consistency to "regular" flour.

But, if you do not like almond flour - or are looking for another suitable flour to use - the best substitutes are going to be sunflower seed flour or walnut flour. And the best thing about using these flours is that you can use them at a 1:1 ratio with almond flour.

So, just keep that in mind when you're making these keto cupcakes.

FLOURS NOT TO USE FOR THESE KETO CUPCAKES

Ok, so we just went over the best flours to use for this recipe, now we need to talk about what not to use.

So obviously, you do not want to use regular all-purpose flour or wheat flour because they are high in carbs and are not grain free.

But another flour you'll want to avoid using in this recipe is coconut flour.

Coconut flour is highly absorbent, and it will cause your cupcakes to turn out dry and have a crumbly consistency.

Also, it has a strong coconut flavor, which will take away from these cupcakes.

KETO FRIENDLY SWEETENERS TO USE & AVOID

Now, we'll still want to give our cupcakes a little bit of sweetness. So, to do this and keep them keto low carb, I recommend using Granulated Swerve to sweeten them up without adding any carbs.

That said, another good keto sugar substitute is Lakanto's Monk Fruit Sweetener. It's naturally-derived, and, like Granular Swerve, has 0 CARBS.

More importantly, you can use Lakanto's Monk Fruit interchangeably with Swerve since they have the same level of sweetness. So, if Lakanto's is all you have on hand, go ahead and use it!

Now, if you live in Europe or don't have either of those sweeteners as an option, you can use either Sukrin or regular erythritol. And the rule of thumb for these keto sweeteners is to use a little bit more than the required amount of Swerve/Lakanto since they aren't quite as sweet.

This might come as a surprise to some of you, but, I don't recommend using stevia to sweeten up your cupcakes.

In its purest form, Stevia is a whopping 300 times sweeter than regular sugar, Swerve, Lakanto, and Sukrin. And using it would make our cupcakes way too sweet to enjoy.

With all that said, I recommend staying away from using it for these cupcakes, and pretty much most other keto low carb recipes too.

HOW TO MAKE KETO CUPCAKES

Ok, so we talked about the ingredients for these vanilla keto cupcakes, now let's talk about how to make them.

And, as I mentioned earlier, this cupcake recipe is super easy and has just 2 steps.

So, let's get into the details!

Then, in a medium-sized bowl, combine the dry ingredients - the almond flour, Swerve, and baking powder.

Now, in a separate bowl, beat together the melted butter, eggs, and vanilla extract for about 3 minutes or so. Then, after you've done that, add the dry ingredients to them - along with almond milk - and mix until a thick batter forms.

Ok, so now that you've got your batter together, line a cupcake/muffin tin with cupcake liners. Then, spoon the cupcake batter about ¾ of the way full into the individual cups.

Now, once those have been filled, you'll want to bake your cupcakes for around 20 minutes - or just until they start to turn golden brown.

So, once the cupcakes are made, pull them out of the oven, and allow them to cool for about 10 minutes. Then, after that amount of time has passed, you'll want to transfer them to a wire rack to cool completely.

And while the cupcakes are cooling, you'll want to make the frosting.

Then once that's whipped up, all you have to do is spread or pipe the frosting on your cupcakes after they cool completely, and dig in!

Ok, so since this keto cupcake recipe uses frosting - at least the ones I made did - they should only sit at room temperature for up to 8 hours.

Now, if you plan on eating all of your cupcakes the day you make them, you can frost them all at once.

However, if you're planning on keeping these cupcakes around for a few days, I recommend frosting them as you eat them. Just store your frosting in a separate container in the fridge if you do this.

Then, when you want a cupcake, simply top it off with the frosting right before you eat it.

That said, the frosting is best when it's eaten within 3 days after it's made.

However, if you want to keep it for longer, the frosting will last in an airtight container in the freezer for up to 1 month.

When you want to use it, let it thaw in the refrigerator for a day, then let it rest on the counter to reach room temperature.

That said, the unfrosted cupcakes will keep on the counter in an airtight container for 2 days. But, if you refrigerate them they'll last for up to a week.

Of course, if you want to keep these delicious cupcakes for longer, you can freeze them for up to 6 months. And to store your cupcakes like this, just wrap them either together - or individually - in plastic wrap, and then put them in a freezer-safe bag.

Now, when your ready to thaw your frozen cupcakes, take them out of the freezer, and leave them in their packaging. And doing this will allow the condensation from defrosting to form outside the packaging and not your cupcakes.

Ok, so this recipe will make 12 soft, fluffy, and oh so tasty keto cupcakes.

And the nutritional information below is only for the cupcakes. But, don't worry, the cream cheese frosting has 0 net carbs per serving, so you won't be adding any carbs to these by making it.

Seriously, a keto dessert that's this low in carbs and tastes this good is a keto dream come true!

And I feel confident saying that if you make these to treat your friends/family with, everyone will be blown away by how delicious they are.

And I guarantee no one will be able to tell they have no sugar and are keto low carb.

Having said that, I hope you enjoy these vanilla keto cupcakes as much as I do.

As always, if you make this keto cupcake recipe, let me know in the comments below how they turned out.

By the way, if you want to put your cupcake pan to good use and make more keto baked goods, try these almond flour banana muffins next. They are made with real bananas and only have 5 NET CARBS each! 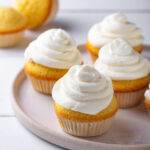 These keto cupcakes are super soft and fluffy, and topped with a sugar-free cream cheese frosting. And, not only are they easy to make, they're quick to make too. From start-to-finish these keto cupcakes take just 25 minutes to whip up. Best of all though, is the fact that each one of them has less than 2 NET CARBS! And, yes, that includes the keto frosting!