These Keto Brownies are so rich, so decadent, and oh so fudgy. So if you're craving some chocolatey deliciousness these absolutely perfect keto brownies are sure to hit the spot. And best of all, these keto almond flour brownies have just over 1 NET CARB each!

These are hands down THE BEST keto brownies in the world.

Think about the most delicious keto brownies you've eaten, and think about them being 10x better - that's what these brownies are.

This low carb brownie recipe makes super fudgy chocolate brownies that are so chewy and gooey, you'll have a hard time believing they're keto.  I mean, they're almost as fudy as this Keto Fudge!

Seriously, my friends and family who aren't even keto said these are the best homemade brownies they've ever had. And they are 100% kid approved too - my nieces and nephews love them.

Oh, and just when you thought this recipe couldn't get any better, you only need a few common low carb ingredients and about 20 minutes to make these easy keto brownies.

As I mentioned earlier, we'll be will be making these keto brownies with almond flour and just a few other ingredients.

That said, here's a breakdown of everything you'll need:

Now, if you don't have all of these ingredients, I HIGHLY RECOMMEND picking them up ASAP. I mean, why would you want to wait any longer than you have to if you're making the world's best keto brownies, right?!

Plus, once you have all of these ingredients, you can make a bunch of our other keto dessert recipes - like these Keto Vanilla Cupcakes with a smooth and creamy Keto Cream Cheese Frosting.

Keto Friendly Flours to Use For These Brownies

The almond flour that I prefer to use is this Blanched Almond Flour by Blue Diamond. It has the lowest carb count I've found out of all the almond flours and is very reasonably priced.

But, if you don't want to use almond flour or have an allergy to it, you can use either sunflower seed flour or walnut flour in its place.

Both flours can substitute with almond flour at a one-for-one ratio and will make these brownies just as delicious.

Now, I DO NOT suggest using coconut flour as a substitute for almond flour in this recipe.

Although you can use it in some low carb keto dessert recipes, coconut flour does not substitute with almond flour at an even ratio. And coconut flour is highly absorbent and will not work with the rest of the ingredients we will be using.

So, avoid using coconut flour for this recipe, or your brownies will turn out dry and crumbly.

As I mentioned earlier, we will be sweetening our brownies in a sugar-free way, and we will use granular swerve to do that.

Granular swerve has the same amount of sweetness as sugar, measures with sugar at a one-for-one ratio, and has 0 NET CARBS and 0 Calories.

Now that is one great way to make some keto-friendly brownies.

With that said, another sweetener you can use is Lakanto's Monk Fruit Sweetener - it is also just as sweet as sugar, measures with sugar at a 1:1 ratio, and has 0 NET CARBS.

Ok, now you know what to use to sweeten your keto brownies, but let's talk about what not to use.

You will want to avoid using both Xylitol and Stevia.

So, xylitol is typically labeled as "sugar-free." And although it says it is sugar-free, it has half the calories and half the carbs as regular sugar - definitely not keto friendly.

Along with that, most companies mix stevia with maltodextrin, maltose, and dextrose - all under cover names for sugar - and these ingredients can kick out of ketosis and are something you want to avoid on keto.

Keto Chocolate Chips To Use

Now, I'll let you on a little secret on how I make these brownies so fudgy and chocolaty. And by secret, I mean secret ingredient - chocolate chips!

And, of course, we will want to use sugar free keto friendly chocolate chips. Having said that, my go-to chocolate chips are these Lily's Semi Sweetened Baking Chips.  They have 0 NET CARBS and taste exactly like regular chocolate chips - I seriously can't tell the difference.

However, if you can't find Lily's Chocolate Chips - or just want to have another option - the other ones I suggest using are ChocZero's Keto Friendly Chocolate Chips.

These have 1 NET CARB and work just as well.

Alright, now it's time to get your apron on!

This recipe has just a few basic steps, and before you know it, you'll be eating the best keto brownies you've ever had.

Now, let's get into the recipe!

Then, when that's taken care of, you can crack your eggs and pour your granular swerve into a medium-sized bowl. Now, use a whisk to beat your eggs with the sugar until they are well incorporated - this will take about 2 minutes.

Then, add the melted butter to your egg mixture, and whisk it again to combine everything.

Next, you'll want to get out a large bowl and pour in your almond flour, cocoa, and salt. Then, after you got those in there, give them a little mix until they combine with one another.

Once combined, add your egg and butter mixture to the large bowl, and gently stir your wet and dry ingredients with a rubber spatula until they're well blended with one another.

Lastly, add in the chocolate chips, and stir some more until they are fully incorporated into the batter.

After the brownie batter is mixed and ready to go, pour the batter evenly into your prepared baking pan.

Then put the pan in the oven and bake the brownies for about 18-20 minutes.

You will know your brownies are done when you insert a toothpick or knife in the middle, and it comes out clean.

Once your brownies are done, let them cool for a few minutes, then cut them and dig in!

Now, this recipe makes 9 "normal" sized brownies - but, you can make more, or less, depending on how you cut them.

And if you are making these brownies for your family or friends, they may not last an entire day.

But if they do, you can store the brownies you have leftover in an airtight container or wrapped tightly in plastic wrap for up to 4 days. I prefer to keep mine at room temperature, but you can also store them in the fridge.

And if you want to keep your brownies for longer, wrap them tightly in plastic wrap and you can store them in the freezer for up to 3 months.

Also, having these brownies frozen is basically like eating fudge, so you might want to make two batches and freeze one of them!

So as I mentioned earlier, each brownie only has just over 1 NET CARBS!

And the rest of the nutritional information makes these brownies the ideal keto dessert.

Here's the full nutritional info for one of these keto brownies:

Now that is how you make the fudgiest, chocolatiest, most delicious brownies in existence.

Give some of these brownies to your friends and family and see the look on their faces when you tell them they're low carb brownies.

Or just keep them all to yourself - I don't blame you if you don't want to share all this goodness.

Anyways, I hope you enjoy this keto brownies recipe!

And if you make them, don't forget to take a picture and tag us on Instagram. We can't wait to see how amazing they look!

Oh, and if you want another deliciously chocolatey dessert, give this No Bake Keto Peanut Butter Pie a try next! 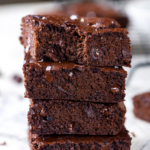 These Keto Brownies are so rich, so decadent, and oh so fudgy. So if you're craving some chocolatey deliciousness these absolutely perfect keto brownies are sure to hit the spot. And best of all, these keto almond flour brownies have just over 1 NET CARB each!