These keto hush puppies are crispy and golden on the outside with a tender and fluffy center. And they have that classic southern flavor - and texture - that you know and love from "normal" hush puppies, except these low carb ones have just 2 NET CARBS each.

If you've never had hush puppies before, you're missing out. They're fried balls of deliciousness that are typically made with cornmeal and they go incredibly well with seafood.

However, the only downside to hush puppies is that they're super high in carbs.

But, that's where this keto hush puppies recipe comes in! This keto version creates little fried balls of tasty tastiness with a savory and slightly sweet flavor - just like you'd expect from "normal" ones.

That said, I've got a feeling that after you make them, they will become your new favorite keto appetizer or side dish.

Plus, it only takes a few minutes to fry them up to golden perfection, and this recipe is so simple to make.

And if you don't want to fry them, you can also make these keto hush puppies in the air fryer!

Either way results in hush puppies with a crunchy outside and soft inside that is incredibly addicting. So good thing each one only has 2 NET CARBS!

While they're frying to golden perfection, you can make this Keto White Gravy to dip the hush puppies in - the combination is too good to be true.

So, as I mentioned earlier, hush puppies are typically made with cornmeal as the base.

But to keep these hush puppies keto, we will be using a combination of almond flour and coconut flour that results in the same authentic texture.

And along with the flours, you'll only need a few more simple ingredients, like...

An ingredient list doesn't get much more basic than that!

Now, before we start making this recipe, let's go over a few of the ingredients.

KETO FRIENDLY FLOURS TO USE

So, as I just mentioned, we will use a mixture of almond flour and coconut flour to make these hush puppies - just like to make these keto cinnamon rolls and keto lemon bars.

Since the combination is essential, DO NOT substitute more almond flour for more coconut flour and vice versa. It will throw off the consistency of these hush puppies and ruin the recipe.

But, if you want to swap out just the almond flour, you can use either an equal amount of walnut flour, sunflower seed flour, or pecan flour.

Again, I do not recommend substituting coconut flour for any other flour. The absorbent properties in coconut flour are necessary to get the best results.

HOW TO MAKE KETO HUSH PUPPIES

The process of making these keto hush puppies is incredibly simple!

Seriously, all you have to do is mix the ingredients and then fry up the hush puppies.

The first thing you will do is gather all of your ingredients and get out a large mixing bowl.

Then add your almond flour, coconut flour, baking soda, garlic powder, salt, pepper, and onion to the bowl and give them a mix.

Next, add in your egg and heavy cream and mix your ingredients just until everything is combined and a batter forms. Make sure you do not overmix the batter!

After you have a batter, place your bowl in the refrigerator for 30 minutes to chill and set. If you want, you can make the batter the night before and leave it in the fridge overnight.

When 30 minutes is almost up, heat your oil in a medium saucepan and let it reach 325°F.

Then scoop out about a tablespoon of batter and place it in the hot oil - you should be able to fry about 4 at a time, and this recipe makes 8 hush puppies.

Let them fry for about 3 minutes or until they turn golden brown, then fry the rest of the batter. After that, place your hush puppies on a paper towel-lined plate to drain any excess oil.

Serve your hush puppies with a dipping sauce of your choice and enjoy!

If you want to air fry your hush puppies, first preheat your air fryer to 400°F (204°C). Then grease the air fryer basket with nonstick cooking spray.

Next, scoop out about a tablespoon of batter and place it in the heated basket. Put as many hush puppies as you can in the basket without them touching one another.

When your basket is full, bake for about 4 minutes, then flip your hush puppies and bake for another 4 minutes or until they are golden brown.

Repeat as many times until all your hush puppies are fried, then enjoy!

So, this recipe makes 8 hush puppies - the perfect amount for an appetizer or side with dinner.

And if you have a large group of people, you can double or even triple this recipe!

Don't worry if you make too many - these hush puppies are delicious leftover and can be stored in the fridge in a resealable bag or airtight container for up to 5 days. Then you can pop them in a 350°F oven for about 2-4 minutes to reheat.

And if you want to freeze them, they'll last for up to 3 months. First, put them on a baking sheet in the freezer and allow them to freeze for a few hours until solid. Then store in a freezer-safe bag or airtight container.

Each one of these crispy golden delights has just 2 NET CARBS!

And here are the rest of the macros for 1 hush puppy:

These keto hush puppies are so tasty and will become a regular food in your life after you give this recipe a try.

They are excellent to make for a variety of occasions and everyone who tries them loves them!

Well, I hope you like this keto hush puppies recipe as much as I do. If you make it, let me know what you think - I'd love to hear.

These hush puppies are such a great appetizer, and I have a few more keto appetizer recipes that are just as good.

If you liked this recipe, I think you'll like these: 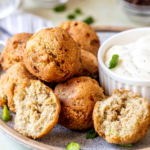 These keto hush puppies are crispy and golden on the outside with a tender and fluffy center. And they have the classic southern flavor and texture, but these low carb hush puppies only have 2 NET CARBS!

About 2 cups oil for frying