This cinnamon roll casserole is as tasty as it gets! It combines fluffy cinnamon rolls with buttery warm spices and a sweet icing that's to die for! Honestly, as far as easy breakfast casserole recipes go, this one is tough to beat. I mean, just 5 minutes of prep work is all it takes to put together, and then the oven does all of the heavy lifting after that.

This cinnamon roll casserole is made by cutting your favorite refrigerated cinnamon rolls into bite-sized pieces and then layering them with a buttery vanilla batter to make them extra ooey-gooey and tender. Then, after it bakes it's topped off with warm icing and pure maple syrup. Every bite is just as good - if not better - than the last, and if you love cinnamon rolls then you're going to love, love, love this casserole.

Now, with that said, this sweet breakfast casserole isn't just super delicious, it's super easy to make too. In fact, just a few simple steps are all you'll need to follow to make it. Honestly, all you have to do is break apart the cinnamon rolls, mix the batter, add it on top of the rolls, and then bake everything together to golden brown perfection in a casserole dish. That's actually all there is to it!

By the way, I love serving this homemade cinnamon rolls casserole on Christmas morning along with this Christmas breakfast casserole. Everyone in my family goes crazy for the two of them, so I highly recommend making both of these easy casseroles if you're hosting Christmas morning - or really any holiday breakfast/brunch.

Now, something else I love about this cinnamon roll casserole recipe is that it's made with all kitchen staples. And that means there's a good chance you'll have most - if not all - of them at home already.

Anyway, here's what you need to make this cinnamon roll casserole recipe:

By the way, if you're looking for another tasty breakfast casserole recipe, you can use a lot of these same ingredients to make this Pioneer Woman French toast casserole as well!

And if you're not in the mood for a casserole, you can use some of the ingredients to make this coffee cake.

Now, this cinnamon roll breakfast casserole recipe uses the icing from the refrigerated cinnamon roll dough, but you can always make your own instead if you want!

As for additional ingredients for this recipe, the only thing I recommend is adding some chopped pecans on top. It'll give this easy breakfast casserole a similar flavor to that French toast casserole I mentioned above.

How to make Cinnamon Roll Casserole

As I mentioned, this cinnamon roll breakfast casserole recipe takes just 10 minutes to prep. And, honestly, the steps are so simple, you could even have your kids - if you have some - help you make it!

Anyway, let's not waste another second and get baking!

First things first, you'll want to preheat the oven to 375°F (180°C) and grease a 9-inch baking dish with half of the melted butter.

Next, you'll want to cut-up the refrigerated cinnamon rolls of your choice - I like to use Pillsbury cinnamon rolls - into any-sized pieces that you want. Then, after you've done that, you can add the cinnamon roll pieces to the prepared baking dish.

So, now you can take out a large bowl and add the eggs, milk, vanilla extract, and remaining melted butter to it. Oh, and if you want to give this cinnamon roll casserole even more of a cinnamony flavor, you can also add a touch of cinnamon to the batter as well.

Anyway, once you've added all of those ingredients into the bowl, you can give them mix with a whisk - or fork - until they're fully combined with one another.

Once the cinnamon roll casserole is baked to perfection, remove it from the oven and let it cool for 5 minutes. While it's cooling, you can make the icing - or cream cheese icing - if you're not using the one from the package.

Finally, serve this cinnamon rolls casserole warm with the icing drizzled all over top, along with a sprinkle of extra cinnamon. Enjoy!

How to Store Cinnamon Roll Casserole

This cinnamon roll breakfast casserole recipe makes about 10 servings so it's the perfect recipe to make for a big family breakfast. Also, since this recipe makes so many servings you might get lucky and end up with some leftovers. And consider yourself lucky if you do, this casserole is even better the day/s after you make it.

Speaking of leftovers, if you end up with some you can either put a lid on the casserole dish or transfer the cinnamon rolls to an airtight container. Stored either of these ways, your leftover cinnamon rolls will last in the fridge for around 2-3 days.

Alternatively, if you want to keep your leftovers for even longer, you can store 'em in an airtight container in the freezer for up to 2 months.

How to Reheat Cinnamon Roll Casserole

Once you're ready to enjoy this delicious cinnamon roll casserole again, you'll definitely want to warm it back up. There's nothing like a warm cinnamon roll am I right?!

Anyway, to do that, you can just put your leftovers on a microwave-safe plate and microwave 'em in 10 second increment until warm.

However, if you're heating up a few servings of leftovers at once you'll want to put 'em back in a baking dish and warm in the oven at 350°F for about 10 minutes - or until they're warm and soft.

This easy breakfast casserole isn't just a holiday delight, it's perfect for a birthday breakfast, mother's day brunch, or even a casual breakfast to treat your family with. I mean, it's just so quick to make and so darn delicious too I have a feeling you'll be finding excuses to make it all of the time!

Anyway, I hope your whole family loves it as much as my family does.

As always, if you give this recipe a try, let us know how it went in the comments below.

We've been obsessed with making casseroles lately, so we have a ton on the blog that you can check out next!

With that said, here are some reader favorites: 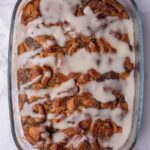 This cinnamon roll casserole is as tasty as it gets! It combines fluffy cinnamon rolls with buttery warm spices and a sweet icing that's to die for! Honestly, as far as easy breakfast casserole recipes go, this one is tough to beat. I mean, just 5 minutes of prep work is all it takes to put together, and then the oven does all of the heavy lifting after that.

1 can of cinnamon rolls, cut into pieces

Vanilla icing, from the cinnamon roll tubes or homemade icing