Perfectly sweet and crispy with a unique touch of cinnamon, this million dollar bacon recipe will take your pancakes, sandwiches - or pretty much any meal you make with it - to a whole new level. Best of all, it's super easy to make. In fact, 2 simple steps and 6 ingredients are all it takes to make this delicious candied bacon recipe.

This delicious million dollar bacon recipe has a special, beautiful way of blending black pepper and cinnamon with the maple syrup to create a flavor like no other.

It's a little salty, a little spicy, a little sweet, and a whole lotta yummy. Plus, it's a huge upgrade from normal old pan fried bacon.

And, don't get me wrong, making bacon the regular way (in a pan) is pretty darn delicious, but there really is nothing quite like some crispy crunchy millionaire bacon. Don't just take my word for it though, try it for yourself! I can almost guarantee if you do, you'll agree.

Also, even though this candied bacon is a little more of an involved process than pan frying it, the entire process is pretty straightforward. As I mentioned, just 2 steps are all this recipe has.

By the way, if you begin the preparation of this bacon recipe right before making these McDonald's Pancakes the bacon will be ready before you're done making the flapjacks. So, if you're making breakfast for yourself - or some family/friends - everything will time out perfectly.

All the ingredients required to make this million dollar bacon recipe are pretty basic and easy to find in any store.

But, just keep in mind that the quality of the bacon you get will have a direct impact on the result.

Anyway, the ingredients you need to make this millionaire bacon are:

The brown sugar and spice mixture gives a delicious zing to any dish. And you will be amazed by how well the pepper and cinnamon go with bacon.

I mean, the smell of this bacon alone will put a smile on everyone's face. Plus, you'll get that extra cozy feeling you get from any dish with brown sugar.

Now, as far as the maple syrup goes, using real maple syrup would be the preferred choice. However, since you are getting most of the sweetness from the brown sugar, you could choose a sugar free maple syrup instead. Doing so will definitely cut back on the sugar and carb content in the dish.

And as I said before: the quality of the bacon is key to getting the perfect million dollar bacon on your table. We used thick cut bacon to make it, and I encourage you to do the same.

Doing so will guarantee you get crunchy, melt-in-your-mouth million dollar bacon. The butteriness of the thick cut bacon just complements the sweetness of the brown sugar & maple syrup so well.

How To make million dollar bacon

So, as I've mentioned a couple of times, just 2 steps are all you'll need to follow to make this million dollar bacon.

It's really as simple as coating your bacon with the ingredients listed above and baking it in the oven.

So, with that said, let's jump into the process of making this recipe.

First things first, you'll want to preheat your oven to 350 °F (180 ºC). This process normally takes around 15 minutes (depending on the oven).

Then, while the oven is preheating, you can mix together the brown sugar, maple syrup, water, cinnamon, ground black pepper, and cayenne pepper if using it. The maple syrup will help every ingredient stick to the bacon. While the water will help with the consistency to make it easier to apply.

Next, put the bacon on a baking sheet lined with parchment paper and brush both sides of it with the delicious sugar mixture.

So, now that the bacon is prepped with the sugar mixture, it's time to get it in the oven.

Now, a pro-tip, to make your candied bacon extra crunchy is to cook it on a baking rack set on top of the baking sheet. Cooking it like this will allow all of the unnecessary bacon grease to drip onto the baking sheet, instead of cooking next to - and into - the bacon itself. This leaves the bacon super crispy when it's done cooking.

Anyway, you'll want to bake it for 15 minutes - or to your desired doneness. For crispier results, you can bake the million dollar bacon for a couple more minutes.

Once the bacon is cooked to your liking, eat by itself or serve with whatever you want and enjoy!

How to Store Candied Bacon

So, this recipe will make about 4 servings if you're eating the bacon as a side.

In the unlikely event that there are bacon slices leftovers, you can simply store them after they've cooled in a plastic bag or sealed in an airtight container. Stored like this the bacon should stay good for the next 4 or 5 days.

To reheat candied bacon, you can put it on a baking sheet, cover it with aluminum foil, and bake it for around 6-8 minutes at 350°F (180ºC) and it should be as good as new.

With that said, you can also warm the bacon back up in a skillet too. Just stay on top of it to make sure you don't burn either side of the bacon slices.

By the way, try to avoid using a microwave to warm the bacon back up. I've just found that when I've used a microwave to reheat this million dollar bacon it dries up a bit too much for my liking.

What is the so-called million dollar bacon from First Watch?

First Watch is a restaurant chain that serves a super delicious million dollar bacon as a menu offering.

Their million dollar bacon is pretty much the same as this candied bacon recipe, but it also has cayenne pepper. They serve a 4-slice portion and use hardwood smoke bacon at the restaurant.

Why is it called millionaire bacon?

It's called million dollar bacon because the sweetness of the brown sugar and maple syrup combine with the spiciness of the cinnamon, black pepper, and cayenne pepper - if you use it - to make a bacon recipe with a one-of-a-kind flavor. Basically, it'll leave you saying that this bacon tastes like a million bucks!

How does Snoop Dogg make his bacon?

The pop culture icon Snoop Dogg cooks his thick cut bacon with brown sugar, black pepper, and red pepper flakes. A bit similar to our recipe, but he makes a spicier version by adding the red pepper flakes and omitting the maple syrup.

Well, that is how to make million dollar bacon!

If you love bacon you're sure to love this recipe. This millionare bacon really takes the flavor of bacon to a whole new level. My family simply can't get enough of it when I make it for breakfast.

Serve it as a side to some pancakes or to layer one of your favorite sandwiches, and just be prepared to be completely mesmerized by this candied bacon.

Anyway, I hope you enjoy this million dollar bacon recipe as much as I/we do.

If you make it, leave a comment below and let me know your thoughts!

If you're looking for some more delicious recipes like this one, we have a ton on the blog that you have to try next!

Check out all of these recipes: 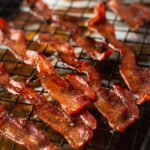 Perfectly sweet and crispy with a unique touch of cinnamon, this million dollar bacon recipe will take your pancakes, sandwiches - or pretty much any meal you make with it - to a whole new level. Best of all, it's super easy to make. In fact, 2 simple steps and 6 ingredients are all it takes to make this delicious candied bacon recipe.