This famous Pioneer Woman French toast casserole recipe is such a delight to the taste buds. The thick French bread turns out crisp yet soft and it has a caramelly sweet flavor that's to die for. The best part about this crowd-pleasing baked French toast though is that it only takes 5 minutes to prepare and it'll make enough to feed the whole family.

This French toast casserole recipe is inspired by the iconic Ree Drummond - aka The Pioneer Woman - and her take on this classic breakfast dish. I came across her recipe a while back and have been hooked on it ever since.

Honestly, it's even become a staple in our family to serve on Christmas morning for breakfast. My family just loves it, and I've got a feeling yours will too!

I mean, how could you not? This baked French toast casserole has all of the nostalgic flavors of traditional French Toast, but it's just so, so much better. The French bread just cooks to perfection in the oven and then when you add the pecan streusel topping on top of it, forget about it, you're on a different level of tasty tastiness.

Gah, it's just so good, and every bite will leave you wanting more.

Seriously, once you get a taste of this French toast bake, you won't want to have any other kind ever again!

And that's not a bad thing when a recipe is as easy as this one to make. It only takes about 5-10 minutes of prep time, then the oven does all of the heavy lifting. Honestly, even if you've never made baked French toast before, this recipe will turn out perfect.

By the way, if you're looking for something else to serve for breakfast - to balance out the sweetness of this recipe - this Christmas breakfast casserole is the perfect pair for it.

This French toast casserole recipe uses all simple ingredients. In fact, you probably have most - if not all of them - in your kitchen right now.

And for the pecan streusel topping:

Not too shabby, eh?

By the way, you can use a lot of these same ingredients to make this coffee cake. So if you're looking for another sweet breakfast option, I definitely suggest making that too!

How to Make French Toast Casserole

So, as I've mentioned already, this french toast casserole recipe is quite simple to make.

All you have to do is cut the bread into slices, soak it in the French toast batter, make the pecan topping, and then bake it all to perfection.

Anyway, there's less than an hour standing in the way of you and your first bite of this delicious French toast casserole, so let's get baking!

Then, you can cut the bread into 1-inch thick slices and set it aside. You can use crusty sourdough or French bread for this recipe - either works great to make this baked French toast.

Next, to make the batter, you'll want to whisk together the eggs, milk, cream, brown sugar, granulated sugar, cinnamon, and vanilla extract in a large bowl.

Now that the French toast batter and bread are both good to go, it's time for the classic French toast step of soaking the bread. So, to do that, you'll want to add all of the bread slices to the milk mixture and let them soak for 1 minute before transferring them to a baking dish.

Then, after you transfer each slice of bread to the casserole dish, you can pour any of the remaining egg mixture on top of 'em.

Now, before you get this baked French toast in the oven, you're going to make the delicious pecan topping for it.

To start, melt the butter with the maple syrup in a saucepot set over medium heat. Then, once your butter melts you can add the pecans to the pot and give them a stir to coat them in the butter and syrup mixture.

Once the pecans are well coated in the sauce you can pour/spread them evenly on top of the bread. Then, when that's looking good, you can cover your French toast casserole with tin foil and bake it for around 20 minutes. After that, remove the foil and bake it uncovered for another 20 minutes.

Finally, you'll want to let your baked French toast cool in the casserole dish - for around 10 minutes - before serving and slicing. Speaking of serving it, you can serve theis French toast as is, or add some butter, fresh fruit, and syrup to the top of it and enjoy it like that.

How to Store French Toast Casserole

This recipe for French toast casserole makes 8 servings so it's the perfect thing to serve for a big breakfast - or brunch - if you're hosting, or if you need something to bring over to a friend or family's house.

Honestly, it's so good that I highly doubt you'll have any leftovers. But, if you do happen to save some, you can store the French toast casserole either in the baking dish you made it in with a cover on top of it, or you can transfer it to an airtight container.

Stored either of these ways it'll last in the fridge for about 4-5 days.

Alternatively, if you want to keep it for even longer, you can freeze it in an airtight container for about 2 months.

How to Reheat French Toast Casserole

Once you're ready to enjoy this French toast casserole again, you'll definitely want to reheat it. To do that, the best way is to put the French toast back in a casserole dish and warm it up in the oven at 350°F for 10-15 minutes - or until it reaches your desired temperature.

However, if you only have a few pieces left, the microwave is the most convenient way to reheat them. Just heat the slices in 30-second increments until heated through.

There's really nothing better than this Pioneer Woman French toast casserole. It's so sweet and so warm and just so, so addictively delicious.

Honestly, with a baked French toast casserole this good, you don't even need a special occasion to make it. It's the perfect treat to make your family any day of the week. It's especially great to make on lazy weekend mornings though.

Anyway, I hope your family likes this easy French toast casserole recipe as much as mine does!

Of course, if you make it, let me know how it goes in the comments below. Oh, and if you want to give another one of our takes on a Ree Drummond recipe, you have to try this Pioneer Woman stuffing.

If you like how convenient casseroles are, we have a ton of easy casserole recipes on the blog that you can try next!

Here are some of our favorites: 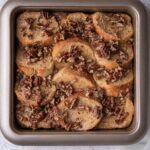 This famous Pioneer Woman French toast casserole recipe is such a delight to the taste buds. The thick French bread turns out crisp yet soft and it has a caramelly sweet flavor that's to die for. The best part about this crowd-pleasing baked French toast though is that it only takes 5 minutes to prepare and it'll make enough to feed the whole family.