These air fryer cinnamon rolls come out tasting like they're straight from a bakery. They're pillowy soft, perfectly chewy, and so darn tasty. And they take just 10 minutes to make and require practically no effort!

Cinnamon rolls are one of those baked goods that are so nostalgic and comforting.

Whether you like them for breakfast as a sweet start to your day or an indulgent treat for dessert, a good cinnamon roll hits the spot every time.

So if you love cinnamon rolls but don't always have the time and energy to make them from scratch, this recipe is for you!

Then, in just 10 minutes, you can have these delectably sweet air fryer cinnamon rolls baked and ready to eat!

And I love using the air fryer because it takes half the cooking time as the oven. Just like using it to make these Air Fryer Mozzarella Sticks instead of frying them!

Plus, if you make cinnamon rolls air fryer style - atleast that's what I call it - they cook to perfection literally every single time. Seriously, making cinnamon roll in the air fryer is the best way to get them to turn out chewy, tender, and perfectly golden brown.

The best part about these air fryer Pillsbury Cinnamon Rolls is you essentially only need 1 ingredient to make them.

And if you want to make the homemade icing, you'll need just 3 simple household ingredients!

And for the optional homemade icing:

As I mentioned earlier, these cinnamon rolls take under 10 minutes to make!

Also, you'll practically have no clean-up to do after you make them, so you can just dig right in and not have to worry about dishes! And that's always a plus in my book.

Now, get your ingredients together, and let's make the recipe!

So, you'll want to start by preheating the air fryer to 350 degrees Fahrenheit (180ºC).

Then, when it's done preheating, remove the basket from the air fryer - if you can still operate it without it - and put the butter directly on the bottom of the air fryer to melt. Removing the basket will allow you to cook more cinnamon rolls at once.

Alternatively, if you want to leave the basket in, rub some butter on it to coat the surface.

Now, once the air fryer is preheated, arrange the cinnamon rolls in it and make sure they are lying flat, and that there is a little space between each one. And you may need to cook them in batches, depending on how big your air fryer is.

Now cook the cinnamon rolls for about 8 minutes, flipping them halfway through. And if they are not golden when the time is up, just add a few more minutes.

If you want to make the homemade glaze, you can prepare it while the cinnamon rolls are cooking.

Now, whether you're using the homemade glaze or packaged glaze, drizzle all of it over the warm cinnamon rolls as soon as they get out of the air fryer.

Finally, put one of these heavenly cinnamon rolls on a plate and dig in!

How To Store Cinnamon Rolls

If anyone is around when you make these air fryer Pillsbury cinnamon rolls, it's hard to believe that there will be any leftovers. And since they're so quick and easy to make, you can always whip up a fresh batch in minutes!

But if you have some cinnamon rolls leftover, you can store them in an airtight container at room temperature for 2 days or in the fridge for up to 1 week!

And if you want to keep them for longer, just put the container in the freezer, and the cinnamon rolls will last for up to 2 months.

If you want that warm, ooey-gooey experience, just pop your cinnamon roll in the microwave for about 30 seconds. I suggest adding some more icing on top before reheating - it's a game changer.

Alternatively, you can put them back in the air fryer for about 4 minutes. And again, definitely add some more icing on top before reheating - put some parchment paper underneath the rolls to catch any icing that drips.

Now, if you're reheating frozen cinnamon rolls, just take them out of the freezer and allow them to thaw for about 10 minutes. Then reheat using one of the methods above.

What temperature do you put cinnamon rolls in the air fryer?

I have found putting cinnamon rolls in the air fryer at 350°F (180ºC) works the best. Anything warmer cooks the cinnamon rolls too quickly, and anything below that temperature takes too long.

How long does it take to cook Pillsbury cinnamon rolls?

Well, that is how to make air fryer cinnamon rolls!

These cinnamon rolls are a decadent treat that takes under 10 minutes to make! They come out perfect every time with so little mess and hardly any effort, and they're just a delightful breakfast or dessert.

Anyway, I hope you enjoy this method of cooking of cooking cinnamon rolls as much as I do.

If you try them, let me know what you think in the comments below!

Try one these tasty recipes out next: 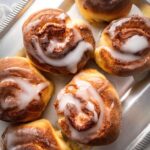 These air fryer cinnamon rolls come out tasting like they're straight from a bakery. They're pillowy soft, perfectly chewy, and so darn tasty. And they take just 10 minutes to make and require practically no effort!