If you've ever had the hashbrown casserole from Cracker Barrel, then you know how delicious it is, and I think this copycat recipe is even better!

Plus, this Cracker Barrel hashbrown casserole is so easy to make! Again, only 5 minutes of prep work is needed to whip it up. All you have to do is a little mixing and pouring, and then the oven does all of the heavy lifting after that.

Honestly, it's so easy that you could make these Denny's pancakes and this million dollar bacon to go with it for a complete restaurant-style breakfast!

This Cracker Barrel hashbrown casserole recipe uses such simple ingredients that I bet you already have most - if not all - of them in your kitchen already!

Anyway, here's what you'll need to make it:

By the way, you can use almost every single one of these ingredients to make two more of my incredible hashbrown-based casseroles - like this chicken hashbrown casserole recipe and this sausage casserole recipe.

Now, I think the combination of buttery potatoes, cream of chicken soup, cheddar cheese, and Colby cheese in this hashbrown casserole is what makes it so delicious. But, with that said, there are a few ways you can modify the recipe to put your own personal spin on it.

First, if you want to add a little more flavor to this hash brown casserole you can add some minced green onions, finely chopped onion, bell peppers, and/or garlic powder. You could even garnish the casserole with crispy onions for an extra crunchy topping.

If you want to make this cracker barrel hashbrown casserole heartier, feel free to add in some leftover chicken, cooked sausage, or even ham.

As far as the cheese goes, shredded cheddar cheese and Colby cheese are my go-to's, but you can really use any shredded cheese. With that said though, mozzarella and pepper jack are a couple of my other favorites to use in this hash brown casserole

How to Make Hashbrown Casserole

As I mentioned earlier, this Cracker Barrel hashbrown casserole recipe is a breeze to make.

You basically just mix the cream of chicken soup with the seasonings, add the thawed hashbrowns, transfer everything to the casserole dish, and top it with cheese. Then, you just have to bake it in the oven, and breakfast - or dinner - will be ready in 40 minutes!

Anyway, let's not waste another second and get cooking!

First, you're going to start by preheating your oven to 350°F (180°C) and greasing a 9x13-inch casserole dish with cooking spray. Then, you'll want to thaw your frozen hash browns if you haven't done so already before moving on.

Now, you can take out a large bowl and add the melted butter, cream of chicken soup, sour cream, onion powder, and black pepper. Then, give everything a good mix until it's well combined. Once it is, you can add the defrosted hashbrowns and one cup of the shredded cheese to the bowl and mix to combine everything together.

Now that the casserole filling is good to go, you can transfer the mixture to the prepared baking dish.

Then, after you've done that, you can just top the casserole with the remaining cheese and bake it for 45-50 minutes. By the way, if you don't want the cheese to get too brown just cover the baking dish with aluminum foil for the first half of the baking process, then uncover it and finish baking.

Anyway, once the casserole is cooked all the way through and the cheese is golden brown on top, you can remove it from the oven. Then, you'll want to let it cool briefly before slicing it and serving it.

Finally, to finish the casserole up, you can garnish it with chopped parsley and serve with some salt and pepper for extra seasoning. Enjoy!

How to Store Hashbrown Casserole

This recipe for hashbrown casserole makes 8 servings, so there's a good chance that you may find yourself with some leftovers. And consider yourself lucky if you do. This hashbrown breakfast casserole might be even better the day/s after you make it.

Anyway, if you end up with some leftovers you can either put a lid on the baking dish - or cover it with foil - or you can transfer everything into an airtight container and store it in the refrigerator for 3-5 days.

How to Reheat Hashbrown Casserole

The leftovers of this Cracker Barrel hashbrown casserole are definitely best enjoyed warm.

With that said, the quickest way to reheat the leftovers is to place them on a microwave-safe plate and microwave them in 30-second increments until heated completely. This method is great if you're just reheating 1-2 servings at a time.

However, if you're reheating multiple servings of this hashbrown casserole, you'll want to transfer it back to a baking dish and heat it in the oven at 350°F for about 10 minutes or until the cheese melts again and it's warmed through.

Who'd have thought such a simple recipe would be loaded with so much flavor? From the creamy, savory filling to the crispy hashbrowns and melt cheese, a breakfast casserole doesn't get any better than this! I know I'm biased, but I really think this is the best hashbrown casserole recipe out there. It might even be better than the one from Cracker Barrel.

Anyway, I hope you love this hashbrown casserole recipe as much as my family and I do.

As always, if you try this recipe, let me know how it goes in the comments below.

Did this copycat Cracker Barrel casserole recipe get you in the casserole makin' mood? If it did, you're in luck. We have a ton of other delicious casserole recipes already on the blog that you can checkout next.

Here are some reader favorites: 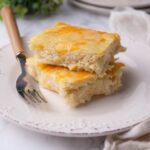 A good pinch of black pepper