This vegan apple pie has a sweet, cinnamon apple filling with a flaky and buttery vegan pie crust. Top each slice off with a scoop of vanilla ice cream, and you've got yourself one of the tastiest vegan desserts you can make. And this pie is perfect for special occasions, holidays, or just those days when you're craving a sweet treat.

There isn't a better dessert to share than a pie made from scratch.

And this vegan apple pie recipe has everything you'd want in a homemade pie, and so much more.

In fact, this pie is so good you'd swear it was from a bakery - just like you'd think this vegan key lime pie was.

The filling is packed with sweet apples and spices that give it the classic apple pie flavor. And the crust is tender with just the right amount of crispness.

That said, we'll be making a lattice pie crust since it makes apple pies so much more visually pleasing - but more on how to do that later.

There are quite a few ingredients that you'll need for today's vegan apple pie recipe, but they are all essential and combine to create a bakery-like pie.

For the crust, you need:

And for the filling:

For the filling, you'll notice that I don't specify what type of apples to use.

That is because you have a variety of apple options to choose from for your filling. And, in the next section, we'll talk about the qualities of some of the apples that will work best in this vegan pie recipe.

APPLES TO USE FOR THE FILLING

Although all apples are good for snacking, only a few are best suited to use in apple pie.

The go-to apples commonly used for apple pie and other apple recipes are Granny Smiths.

The high acidity in these apples gives them a firm texture, allowing them to hold together well when baked. They also have a tart flavor, which provides an ideal balance to the sweet ingredients.

Now, if you want a sweeter tasting pie, you can mix some sweeter apples that we'll talk about with the Granny Smiths.

An apple that has a good balance of tartness and sweetness are Braeburn apples.

They have a concentrated apple flavor that becomes stronger when baked.

These apples also contain natural cinnamon and nut-meg like flavors, mixing perfectly with the ingredients we'll be using.

On top of that, Braeburn apples are super crisp with a firm texture that doesn't lose its form when baked.

Honeycrisp apples are one of the most common snacking apples because of their deliciously sweet flavor.

When baked, they tend to keep their form, and the sweet flavor becomes more intense. And that makes these apples a good choice if you want a super sweet apple pie.

Also, they don't break down as they cook, and they hold together well. This makes McIntosh Apples a great apple to pair with tarter apples like Granny Smiths.

An apple that has a mellow sweetness is Gala apples.

They don't get too soft in the oven, and they have a mellow sweetness to them. And that makes them perfect for apple pie.

These are a great apple to pair well with other apples, but they can work well on their own if the pie has extra sweetness and spices already.

A cousin of Golden Delicious is Jonagold apples.

These apples have a nice mix of sweetness and tartness. And that makes them an ideal apple to use by itself.

That said, Jonagolds can be hard to find at the grocery store, so you may have to pick these up at a farmer's market.

An apple that doesn't brown quickly is Cortland apples - and this means that you can slice them up and set them aside when you work on the dough.

Cortland apples are very sweet, with a slightly tart flavor, working well in this recipe.

Use them on their own for a sweeter vegan apple pie, or, pair them with Granny Smith apples for a more balanced flavored pie.

HOW TO MAKE VEGAN APPLE PIE

Alright, so now that we've gone over all of the apple options to make your pie with, now let's talk about the steps you need to follow to make this vegan pie.

That said, if you're feeling a little lazy, you can use a store-bought pie crust. Just make sure it is vegan-friendly.

Now, Without further ado, let's talk about how to make a vegan apple pie from scratch.

Then, you'll want to get out a food processor and gather your ingredients for the crust.

That said, place the cassava flour,  corn flour, sugar, and guar gum into the food processor bowl, and pulse a few times to mix the ingredients well.

Next, add in the cold butter cubes, and pulse again until the mixture looks like coarse, dry crumbs.

Then, when those crumbs start to take shape, add in the cold water and pulse 4-5 times - the dough should look crumbly.

Now, you can pour those crumbles into a bowl, and shape a ball of dough out of them. Then, when you've done that, you'll want to remove about ⅓ of the dough from the ball and set it aside to make the top crust/lattice crust to your pie later on.

Having said that, you'll want to take the remaining ⅔rds of dough and flatten/shape it the into a large circle.

So, to do this, you'll want to roll the dough into a ⅛ inch thick circle between 2 sheets of parchment paper. Also, when you do this, make sure that you roll enough dough out that it extends about half an inch past the rim of the pie dish.

Now, once that's looking good, peel the top sheet of paper off the dough, and carefully flip the dough onto a 9-inch pie dish.

Then gently peel the paper off the other side and press the dough with your hands to form it on the pie plate.

Alright, so to make the filling, you'll want to combine the sugar, tapioca flour (or cornstarch), cinnamon, nutmeg, and salt in a large bowl. Then, whisk those ingredients together until they're combined.

Next, add in the sliced apples and gently coat them with the mixture.

Now, when you've thoroughly coated those, you'll want to place the apple mixture into the prepared crust, and evenly distribute it.

Then, scatter the cubed butter all over the top of the apples.

So, to make the lattice crust for your apple pie, you'll want to roll out the leftover dough in the shape of a circle. And you'll want the circle to be big enough to cover up the top of your pie.

Then, after you've rolled it out, you'll want to cut it into 10 strips using a pizza cutter.

Now, once you've got the strips cut out, you'll want to lay 5 of them vertically and 5 of them horizontally on top of the filling. Also, make sure you use the longer strips in the center of the pie and the shorter strips on the ends - and make sure they're evenly spread out.

Anyway, at this point, you can weave the strips under and over one another in a rotating fashion.

So, if the first piece of a strip of dough is on top of another piece, the next will be under it. And so on, and so forth, until all of the dough has been weaved.

Optional: refrigerate the unbaked pie for 30 minutes prior to baking to ensure the lattice shape holds when baked.

Ok, so now that the pie is fully prepared, it's time to bake it!

Then, you'll want to let the pie cool down for several minutes before slicing it up!

One of the best parts about this apple pie is that you can enjoy it for dessert - or breakfast - throughout the week.

That said, you can keep the baked pie at room temperature for up to 2 days, or in the refrigerator for 3-4 days. And if the pie has been sliced, just make sure you loosely cover it with foil or plastic wrap before storing it.

If you want to prepare this pie in advance and then make it fresh for a special occasion or holiday, you can freeze the unbaked pie.

To do this, wrap the pie tightly in plastic wrap, place it in a freezer-safe bag, and then freeze it.

Then, when you're ready to cook the pie, just unwrap it, and immediately bake it at 425°F for 15 minutes before reducing the heat to 375°F and baking for another 30 to 45 minutes.

The pie might also take a bit more time than this to cook, so just keep an eye on it. The making thing is that the crust is golden brown, and the apples are tender.

So, that's how to make a vegan apple pie that will wow your family and friends.

As always, I hope you enjoy this recipe as much as I do.

And, if you try it, let me know what you think about it in the comments below.

If you want some more recipes that are on the same level of deliciousness as this vegan pie, check these out: 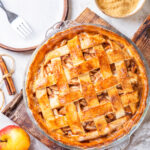 This vegan apple pie has a sweet, cinnamon apple filling with a flaky and buttery vegan pie crust. Top each slice off with a scoop of vanilla ice cream, and you've got yourself one of the tastiest vegan desserts you can make. And this pie is perfect for special occasions, holidays, or just those days when you're craving a sweet treat.

The scale up function does not change the gram measurement.s