This vegan key lime pie is sweet and creamy with the perfect amount of tang. It has a toasted graham cracker crust with a smooth key lime filling. Plus, the whole pie is entirely dairy free and egg free, and the substitutes we'll be using gives the traditional key lime pie an upgraded flavor.

There aren't many vegan desserts better than a pie on a graham cracker crust. Atleast I don't think there are.

And this recipe has everything you could want in a pie and MORE!

It has the perfect balance of flavors and textures – the graham cracker vegan pie crust is crisp and buttery, and the filling tastes rich and refreshing with a perfect key lime flavor.

And what I think sets this vegan key lime pie apart from the non-vegan versions – in the best way possible – is the subtle coconut flavor found in it. It perfectly complements the tanginess of the key lime while amping up the dreamy creaminess of the filling.

Honestly, this pie is so good, it's quickly become one of my favorite vegan dessert recipes.

And, it might just be one of the best pie recipes - vegan or non-vegan - out there. Especially if you're someone who likes desserts with a lime flavor.

Also, this recipe doesn't take a lot of time or effort to make. Overall, you're looking at about 15 minutes of active cooking time, and the rest is just letting the pie set while you go about your business.

Not too bad for a pie recipe, right?!

And, there's a good chance you have most - if not all - of these ingredients at home already.

For the crust, you'll need:

And, for the filling you'll need:

Ok, so those are our ingredients that we will be using to make this delicious recipe.

But, I just want to mention a few things about the ingredients.

Just make sure you don't have any big pieces of vegan graham cracker left after you blend them.

Also, be sure to double-check the ingredients list of your vegan graham crackers.

Many brands flavor theirs with honey, so instead, look for plain graham crackers or ones sweetened with maple syrup or classic brown sugar.

Vegan Dairy Substitutes For The Filling

So for this recipe, I decided to go with sweetened condensed coconut milk and coconut cream for the filling to substitute the usual eggs and cream used in key lime pie.

And coconut milk has a ton of healthy fats so it's the perfect candidate for making the pie as rich and creamy as possible.

And, as a bonus, the coconut flavor pairs amazingly well with the tartness of the limes.

I also used sweetened condensed coconut milk, which is the best vegan substitute for regular condensed milk. Besides being a tremendous vegan sweetener, it also has a deep and mellow flavor that rounds out the taste of the filling.

Then, use a spoon to skim the solidified coconut cream off the top of the can and put it in a bowl.

After the coconut cream is in a bowl, continuously whisk it in a circular motion until it develops a cream-like consistency.

By the way, you can save the rest of the coconut milk, which is now essentially coconut water, and freeze it to make ice cubes to use for smoothies.

As I mentioned, the whole vegan pie recipe comes down to three key steps (see what I did there): making the crust, the filling, and letting the pie set.

It'll take you about 15 minutes total to make both the crust and the filling.

The long part of the recipe is that it takes a minimum of 5 hours to set in the fridge.

Although it will be tempting to eat right away, it is totally worth the wait.

Then, in a medium-sized bowl, mix the vegan graham cracker crumbs with the melted vegan butter until well-combined.

Now you're all set to press the mixture evenly in an 8" or 9" pie pan. And you can do this with your fingers, the bottom of a measuring cup, or a large spoon.

Then, when your crust is pressed out, you'll want to bake it in the oven for about 7 minutes and let it cool at room temperature for 30 minutes.

Now, to make the filling, you'll want to combine all of the filling ingredients - the sweetened condensed milk, coconut milk, arrowroot starch, coconut cream, lime juice & zest, and coconut oil - in a medium saucepan and bring them to a boil over medium-high heat. Also, you'll want to continually stir this mixture to prevent anything from sticking to the bottom of the pot.

Now, after about a few minutes of cooking the filling should start to thicken up. And, when it does, you can pour it into your cooled graham cracker crust.

Also, if the filling is not looking super thick at this stage, don't worry, the filling will thicken a lot more as it cools.

Having said that, once you've added the filling to the crust you'll want to let it cool down to room temperature, and then refrigerate it until it sets.

So, as I just mentioned, you'll want to refrigerate the pie until the filling sets. And it will definitely take several hours for that to happen.

That said, I think for the best vegan key lime pie results, you'll want to refrigerate the pie overnight. At the very least though, refrigerate it at least 5 hours.

Then, when it's set completely, top it with your choice of vegan whipped cream, and serve!

If you plan to enjoy your vegan key lime pie throughout the week, you can keep it in an airtight container and refrigerate for 3-5 days.

That said, if you want to store your vegan key lime pie in the freezer, you'll definitely want to place it in an airtight container or a heavy-duty freezer bag before freezing.

Also, if you freeze the pie, you should eat it within 1-2 months for that same freshly made taste. But, if for some reason you don't eat it in that two-month time frame, the pie will still be safe to eat, just expect a slight change in the texture and quality.

Oh, and by the way, make sure to thaw it in the fridge for a few hours before eating.

I'm confident saying that if you serve this key lime pie to your friends or family, they won't believe that you didn't buy it from a bakery.

Seriously, it's that good!

Like, you'll want to eat the whole thing, good.

Anyway, I hope you like this vegan key lime pie recipe as much as I do!

As always, if you make it, let me know how it turned out in the comments below.

I'd love to hear about it! 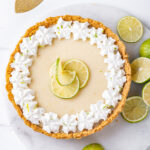 This vegan key lime pie is sweet and creamy with the perfect amount of tang. It has a toasted graham cracker crust with a smooth key lime filling. Plus, the whole pie is entirely dairy free and egg free, and the substitutes we'll be using gives the traditional key lime pie an upgraded flavor.

To Make The Crust:

To Make The Filling: