This easy homemade mac and cheese recipe has quickly become a family favorite in our house!  The macaroni noodles are cooked to perfection, and the cheese sauce uses a combination of cheeses that are so rich, creamy, and so melty, you'll be going back for seconds and thirds. Plus, this recipe doubles as an incredible smoked mac and cheese recipe too!

THE BEST HOMEMADE BAKED or SMOKED MAC AND CHEESE RECIPE

Mac and cheese is such a quick, easy, and popular meal to whip up for dinner. I mean, who doesn't love macaroni and cheese!?

I know I especially did when I was a kid. It was easily one of my favorite meals, and I have to say I still have a soft spot for some Velveeta mac and cheese.

And don't get me wrong Kraft macaroni and cheese is pretty good, just not as good as Velveeta. Atleast, I don't think it is!

Anyway, if you like the store-bought stuff, you're going to LOVE the taste of mac and cheese from scratch - there's simply no comparison between the two.

The noodles are perfectly tender, and the cheese sauce is loaded with rich and buttery flavors that go beyond the depths of anything that comes out of a box. Then, of course, there's the golden crispiness of the cheddar cheese that gets backed on top, which takes this mac & cheese recipe to a whole new level of deliciousness.

And the best part is that the process of making this smoked macaroni is about as simple as making the one from the box!

So, if you ever need a quick and easy dinner recipe everyone will love, this one is a life-saver. Or if you want to eat the smoked mac and cheese as a side, it goes great with these Instant Pot Sloppy Joes!

Oh, and if you love rich and creamy mac and cheese, you have to give this Instant Pot Risotto a try next.

So, as you know, we will be making a simple mac and cheese recipe.

And to do that, you'll need:

Those are some pretty basic ingredients, some of which you probably already have at home!

And if you don't, I highly suggest you grab what you need from the store - it's totally worth all this deliciousness. If you want, you can shred your own cheese, but the pre shredded cheese will save some time.

Oh, and if you want a totally vegan mac and cheese recipe, there is a pretty great recipe for that on the blog as well.

MACARONI TO USE FOR MAC AND CHEESE

Now, for the cooked macaroni noodles, I used elbow pasta. But, you can really use a ton of other kinds of macaroni as well.

Here are some other kinds of pasta you can use to make mac and cheese with:

If you have kids, go with the alphabets or wheels, they are always a hit!

But of course, you can use any pasta you want and this recipe will be just as delicious!

So, if you're interested in making this mac and cheese gluten free it's actually super easy to do that.

All you have to do is use a chickpea pasta in place of the wheat pasta, and this becomes a gluten free macaroni and cheese recipe. Yeah, it's that simple.

With that said, I like Banza's Chickpea Pasta the best. I've been using it for years, and it tastes like regular pasta, but it's totally gluten free. It's also low in carbs, and high in fiber and protein - and I really like that a lot!

Honestly, using a chickpea-based macaroni is one of the easiest ways you can make mac and cheese healthy. Or, at least a bit healthier than it normally is.

HOW TO MAKE HOMEMADE MAC AND CHEESE

So, as I mentioned earlier, this recipe is super easy to make!

It will only take about 10 minutes to prepare, and then your oven will take care of the rest.

Now let's, make this mac and cheese, shall we?!

First, preheat the oven to 400 degrees Fahrenheit (205°C) and make your pasta according to the package directions.

While the pasta is cooking, you can make the cheese sauce.

Start by putting 2 tablespoons of milk from the 1 cup in a small dish with the cornstarch and combine until it dissolves.

Then heat the butter in a non-stick pan over medium heat and add in the cup of milk, followed by the milk and cornstarch mixture. Stir everything together until it starts to get thick.

Once it thickens, add in the cheddar and gouda cheese, mustard, salt, and pepper, and cook for about 5 more minutes or until the cheese has melted. And you can occasionally stir while it is melting.

After the cheese has melted, add the cooked pasta to the pan and mix it with the cheese sauce to fully coat the pasta.

Then transfer the mac and cheese to a baking dish and evenly top it with the cup of cheddar cheese.

Finally, bake your mac and cheese for 10-15 minutes, or until the cheese is melted and golden brown on top.

HOW TO MAKE SMOKED MAC AND CHEESE

In fact, all you have to do is follow all of the instructions above, except for the last one - the baking instructions.

Instead of using a baking dish, just add your mac and cheese to a tin pan that's been coated with non-stick baking spray, and cook it on the smoker for around 2 hours at 225 degrees Fahrenheit.

Pro-tip: Just make sure the heat is indirectly cooking the macaroni and cheese as it smokes.

Also, just so you know, the mac and cheese is done once it's crispy on the outside, but still nice and gooey on the inside. I usually start checking on it every 10 or so minutes at the hour and a half mark.

And that's really all there is to making smoked mac and cheese with this recipe.

STORING THIS HEALTHY MAC AND CHEESE

This healthy mac and cheese recipe makes about 6 servings, so you'll have plenty for the entire family!

And if you have some big eaters or are serving this for a lot of people, you can easily double or triple the recipe.

Don't worry about having too many leftovers - you can store them in an airtight container in the fridge for up to 5 days.

And if you were wondering can you freeze mac and cheese, the answer is yes - you can freeze macaroni and cheese for up to 3 months.

HOW TO REHEAT MAC AND CHEESE

To reheat multiple servings of your leftover mac and cheese, first put it in a lightly buttered baking dish and cover it with tin foil.

If you want a quicker method or are reheating a single serving, you can put the mac and cheese in a microwave-safe bowl.

Then add one tablespoon of milk per cup of mac and cheese you're reheating. Microwave in 20-second increments, stirring in between each until it reaches your desired temperature.

FAQ'S ABOUT THIS MAC AND CHEESE RECIPE

Ok, let's answer some frequently asked questions about this recipe.

What are some milk substitutes for mac and cheese?

Here are a few of my favorite milk substitutes:

All of these can be substituted for milk in a 1:1 ratio in not just this mac and cheese recipe, but pretty much any recipe.

Can you substitute water for milk in mac and cheese?

Yes, you can, but you'll end up with a runnier cheese sauce that won't be nearly as flavorful as if you used milk - or a milk alternative.

However, if you only have water on hand, consider mixing a couple of tablespoons of sour cream or yogurt into it. If you do that you'll have much tastier - and creamier - results.

What are the three best cheeses for mac and cheese?

I think the essential cheese for mac and cheese are cheddar and gouda. Then the third one that compliments those two is parmesan cheese since it has a subtle flavor. So if you want to add more cheese, just sprinkle it on top after cooking while the creamy smoked mac is still hot.

Alright, so that is how to make the best simple and easy baked or smoked mac and cheese recipe!

As I mentioned earlier, this quick and easy meal has become a staple in our house, and I have no doubt it will quickly become one in yours too.

Anyway, I hope you enjoy this easy mac and cheese recipe as much as we do.

Make sure to leave a comment below if you make it, I'd love to hear your thoughts!

If you liked how easy this recipe was to make, there are a ton of other easy dinner recipes the blog as well!

Try making one of these next: 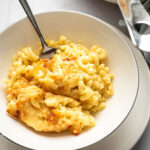 This easy homemade mac and cheese recipe has quickly become a family favorite in our house!  The macaroni noodles are cooked to perfection, and the cheese sauce uses a combination of cheeses that are so rich, creamy, and so melty, you'll be going back for seconds and thirds. Plus, this recipe doubles as an incredible smoked mac and cheese recipe too!