This quick and easy trenette el pesto is the iconic Luca pasta recipe that Luca and Alberto eat in the movie "Luca." It’s bright and flavorful, packed with a delicious homemade pesto, Italian cheese, and perfectly cooked pasta. Best of all, it’s super simple to make and is ready in about 30 minutes!

If you’ve been craving the absolutely delicious-looking pasta from Luca, then you’ve come to the right place.

This trenette al pesto is the green pasta Luca and Alberto eat at Giulia’s house for dinner in the Disney-Pixar movie Luca.

And, yes, it’s every bit as delicious as it looks in the film.

You’ll definitely want to dig in with your hands once you’ve tried it!

It’s garlicky, herby, and cheesy in all the right amounts. It’s also got bites of hearty potatoes and crisp green beans mixed in, making it a truly satisfying dinner both kids and adults will love.

Plus, it’s really quick and easy to prepare this Luca pasta recipe. The famous trenette al pesto is ready in 30 minutes or less and all you need is one pot on the stovetop and a blender for the sauce. Yup, that's it.

Also, for what it's worth, this pesto pasta - along with the movie Luca - has quickly become a favorite in the Cunningham family. It's at the top of our list with this vodka cream sauce pasta and this Olive Garden asiago tortelloni alfredo, so make sure to check those out next!

Ok, so this Trenette al pesto recipe uses authentic Italian ingredients for the tastiest and most accurate Luca pasta.

But, don’t be intimidated - most of these are super common pantry staples, and anything you don’t already have should be easy enough to find at the grocery store or online.

With that said, here’s everything you’ll need to make this Luca pasta recipe:

Massimo knows what he's doing putting together a pasta dish, so you'll want to make sure you use all of the ingredients on this list if you can!

Now, just so you know, trenette pasta is super hard to find in stores, but it's almost exactly like linguine, so that'll work just as well.

Also, this pasta goes really great with this garlic bread or cheesy bread on the side, so you might want to get the ingredients you need to make one of those too.

HOW TO MAKE LUCA PASTA

As I mentioned earlier, the pasta from Luca couldn’t be easier to make. It’ll only take about 30 minutes to make everything from start to finish.

The pasta and vegetables all cook in one pot on the stove and the sauce is made with just a blender.

Basically, if you can boil water, you can make this trenette al pesto with no problem!

Now, with all that said, let’s dive (see what I did there?) into this Luca pasta recipe.

STEP 1: PREP THE PASTA AND VEGETABLES

First, fill a large pot with water. Add a teaspoon of salt and a tablespoon of olive oil to the water, then bring it to a boil.

Once the water is boiling, add in the peeled and diced potatoes and cook them for 4 minutes.

Then, without taking out the potatoes, add in the pasta and continue boiling for 8 minutes.

At the 8 minute mark, add the trimmed green beans to the water and let everything cook until the pasta is al dente. You’ll know the pasta is al dente when you cut a noodle in half and find just a small pinprick of white in the cross-section and it will feel slightly harder.

Reserve about a cup of the pasta water, then strain the pasta and vegetables and set them aside.

You can also use a mortar and pestle, which will take longer, but is most likely what Giulia’s dad Massimo used in the movie!

Also, if your sauce seems too thick, you can blend in a little bit of pasta water at a time until you’ve reached your desired consistency.

Now that everything is ready, it's time to complete the dish.

To finish up, toss the pasta and vegetables with the pesto sauce and serve with extra parmesan cheese to sprinkle on top.

Ok, so just like in the movie, this trenette al pesto makes enough for 4 people. And I highly recommend making a bigger batch of the pesto sauce if you want extras for later. Stored in an airtight container in the fridge, the pesto will stay good for up to 5 days.

Also, if you happen to have leftovers, you can store them in an airtight container in the fridge for up to 2 days.

To reheat, add a splash of water and heat it in the microwave in 1-minute increments until warm. Or, warm it back up on the stovetop, again with a small splash of water to loosen up the pasta.

FAQ’S ABOUT THIS LUCA PASTA RECIPE

What is the pasta in Luca called?

The pasta Giulia’s dad, Massimo, gives Luca and Alberto when they go over to his house is called Trenette al Pesto, specifically Trenette al Pesto alla Genovese. Trenette is a narrow and flat pasta, similar to linguine and fettuccine, and pesto is a sauce made of basil, olive oil, cheese, and pine nuts. Massimo makes it with potatoes and green beans, a signature of trenette al pesto made in Genoa, the capital of Liguria, Italy.

Where does trenette al pesto originate from?

Trenette al pesto originated around the 16th century in Genoa, the captial of Liguria in Italy. It’s a northwestern part of Italy that borders the Ligurian sea. What makes it special in this dish is that the pasta is boiled together with the diced potatoes and green beans. It truly is a one-of-a-kind meal that Pixar made famous in the movie "Luca".

So, that’s how to make trenette al pesto from Luca the movie!

The movie makes this pasta look so mouthwatering, and I think it’s safe to the real thing doesn’t disappoint. This Luca pasta recipe is quick-cooking, easy to make, healthy, and above all, incredibly tasty.

It’s sure to be a fun treat for the family after watching the movie, and will probably become a staple in your weekly rotation. Well, that’s the case in our home at least!

Anyway, I hope you enjoy this pasta from Luca as much as my family and I do.

If you make it, be sure to let me know what you think in the comments below.

And of course, don’t forget to check out our Youtube channel for more delicious recipes like this! 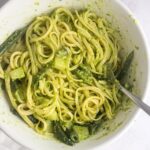 This quick and easy trenette el pesto is the iconic Luca pasta recipe that Luca and Alberto eat in the movie "Luca." It’s bright and flavorful, packed with a delicious homemade pesto,  Italian cheese, and perfectly cooked pasta. Best of all, it’s super simple to make and is ready in about 30 minutes!