This copycat Chipotle pollo asado recipe is so, so good. It combines the perfect balance of fresh citrus juices and aromatic spices with tender, juicy pieces of chicken to create a meal that's unforgettable. With that said though, this pollo asado isn't just super delicious, it's also super easy to make. In fact, just a few simple steps are all you'll have to follow to make it. Plus, it's super quick, too - this Mexican grilled chicken cooks up in only about 10 minutes!

If you've never had pollo asado before, then get ready to have your mind blown.

Not only is this recipe incredibly simple to whip up, but it also creates some of the most deliciously seasoned grilled chicken you'll ever have. I mean, this pollo asado is marinated in a super tasty blend of lime juice, orange juice, garlic, cumin, onion powder, and more, and then it's grilled to perfection.

Honestly, I think it's even better than the pollo asado Chipotle serves, and that's really saying something.

Best of all though, is just how simple this chicken recipe is to make. All you have to do is combine the pollo asado marinade ingredients together with the chicken, then let that sit for a couple of hours, and finally grill it up.

Yup, that's all there is to it!

Also, since most of the time spent making pollo asado recipe is super passive, you'll have plenty of time to make a tasty side dish to go with it. I love pairing rice with it - this jollof rice recipe, this Mediterranean rice, and this tumeric rice are a few favorites that come to mind.

Now, although this pollo asado recipe is packed with flavor, most of that flavor comes from pantry and kitchen staple ingredients. In fact, I'm willing to bet you already have most - if not all - of the ingredients you'll need to make this dish at home already!

By the way, you can use many of these same ingredients to make this huli huli chicken. So, if you end up with some extra chicken thighs and you're looking for another tasty way to grill chicken, definitely give that recipe a shot sometime soon!

Now, I pretty much almost always make this Mexican grilled chicken recipe with the ingredients listed above, but there are some changes you can make to it, and it'll still turn out great. With that said, I'll go over a few of them below.

So, for this pollo asado recipe, we are going to be using chicken thighs to make the grilled chicken, specifically boneless skinless chicken thighs. But, just so you know, you can use chicken breasts in place of the chicken thighs if you prefer.

Just keep in mind the cooking time may vary slightly if you're using chicken breasts.

Also, if the chicken thighs - or chicken breasts - are thicker, I recommend either slicing them horizontally or tenderizing them with a meat hammer so that they're all uniform in thickness. Doing so will just ensure that all of your pieces cook evenly.

Change Up The Marinade

So, as you already know, this pollo asado recipe has a simple marinade. It's designed to accentuate the flavors of the grilled chicken thighs with some classic Mexican spices, but you definitely can make some subs/additions to it to give it your own twist.

As far as the oregano goes, a really tasty option to swap it out with is Mexican oregano. Mexican oregano actually tastes quite different than "normal" oregano - it has more of a citrusy flavor - so it will complement the fresh citrus juices in the marinade incredibly well.

Also, if you'd like to ramp up the flavor even more, you can add some additional seasonings to the pollo asado marinade. A little smoked paprika or red chili flakes go a long way in it. They're both tasty ways to up the heat level in the marinade.

How To Make Pollo Asado

So, I know I mentioned it earlier, but it's worth saying again - making pollo asado is incredibly easy with this recipe. After the chicken marinates, all you have to do is just let it cook for about 10 minutes, and then dinner is served.

First, take out a large bowl and place the raw boneless skinless chicken thighs in it. Then, pour the fresh orange juice and fresh lime juice into the bowl, followed by the salt, minced garlic, oregano, ground cumin, black pepper, achiote powder, and onion powder. Now you'll want to use your hands to combine all of those ingredients together, and then you can cover the bowl with plastic wrap.

After you've got that all prepped, you can pop that bowl into the fridge and marinate the chicken for at least 2 hours. Honestly, the longer you marinate chicken, the better. So, if you want to do this step the night before and let the chicken marinate overnight, you definitely can do that too.

Now, when the chicken has been in the marinade long enough, you can preheat a grill pan - or an outdoor grill - over medium-high heat. Then, you'll want to add a little oil to the grill pan and add your chicken to it.

Anyway, when the chicken is cooked, you'll want to transfer each piece of pollo asada to a plate and set it aside.

Now, once all of the pollo asado has finished cooking, it's time to dig in! I recommend serving it with some fresh cilantro, lime juice, or pico de Gallo.

However you eat this chicken, it'll be delicious, so enjoy!

How To Store Pollo Asado

This recipe for pollo asado makes about 4 servings, so there's a decent chance you'll have some leftovers. And consider yourself lucky if you do have some extras - this copycat Chipotle chicken tastes even better the next day!

Anyway, to store your leftover pollo asado, just transfer each chicken breast to an airtight container, and then you can keep it in the fridge for up to 3-4 days.

Alternatively, if you want your leftovers to last even longer, you can freeze your pollo asado in an airtight container - or freezer-safe bag - for up to 3 months.

How To Reheat Pollo Asado

I'm not going to lie, your leftover pollo asado will taste pretty delicious cold, but it'll taste even better warmed back up.

So, with that said, my favorite way to reheat the Mexican grilled chicken is to transfer it to a baking sheet lined with parchment paper and cook it in the oven at 350°F for about 10 minutes.

However, to heat your pollo asado back up even quicker, you can use a microwave. Just heat it in 30-second increments until it reaches your desired temperature.

Well, that's how to make pollo asado that tastes just as good - if not better - than the one they serve at Chipotle!

If you ever thought it was hard to cook pollo asado, I hope this recipe has convinced you otherwise. It's seriously so, so easy to make, and the chicken is filled with the most delicious Mexican flavors. And I know I'm a bit biased, but I honestly think it might be one of the best chicken thigh recipes ever!

Anyway, I hope you like this pollo asado as much as I/we do.

As always, if you give this copycat Chipotle chicken recipe a try, leave a comment below and let us know how it went.

If you're looking for more delicious chicken recipes that are filled with Mexican flavors - just like this pollo asado is - we have a bunch on the blog that you can try next.

Here are some reader favorites: 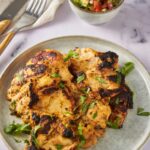 This copycat Chipotle pollo asado recipe is so, so good. It combines the perfect balance of fresh citrus juices and aromatic spices with tender, juicy pieces of chicken to create a meal that's unforgettable. With that said though, this pollo asado isn't just super delicious, it's also super easy to make. In fact, just a few simple steps are all you'll have to follow to make it. Plus, it's super quick, too - this Mexican grilled chicken cooks up in only about 10 minutes!