These vegan waffles are light and fluffy on the inside while being perfectly crispy and golden on the outside. They have the exact texture and consistency that you would want in a waffle. Plus, this recipe is incredibly easy to make. As long as you have a waffle iron, you can whip up the best vegan breakfast or brunch in no time.

I am very particular about waffles and don't enjoy them when they are overly crispy or too soft, lacking a balance of textures that make waffles oh so tasty.

Luckily, this vegan waffle recipe makes waffles that have the perfect balance of fluffiness and crispiness.

Top them off with vegan butter, fresh fruit, and maple syrup, and you've got yourself an irresistible plant-based breakfast.

Seriously, these waffles are insanely good. Like so good that you could open up a diner in your kitchen.

Oh, and this recipe doesn't just serve as a delicious breakfast.

It is also one of the best vegan brunch recipes out there.

So have a few friends over, get the mimosas going, and let the waffles steal the show.

Plus, this recipe doesn't take much time or effort to make.

It's as simple as making the batter in just a few minutes, and then waiting for the waffles to cook to perfection.

While you're waiting for them to cook, you can prepare one of the many topping options you have, but we'll get into that a little later.

Oh, and the ingredients are all common pantry ingredients, so you can make these waffles whenever you want.

And if you're looking for a savory vegan meal that doubles as breakfast and brunch, this vegan biscuits and gravy recipe has you covered.

So, as I just mentioned, we will be using common pantry ingredients to create our waffles.

The only odd ingredient is the aquafaba, which we will be using to make eggless waffles.

Hopefully you have all these ingredients and can jump right into making the recipe.

If not, the trip to the grocery store is well worth it.

Ok, so you might be wondering what aquafaba is.

Although the name sounds exotic, aquafaba is simply the water from a can of chickpeas.

When chickpeas get cooked, the proteins, carbohydrates, and other water-soluble plant solids migrate into the cooking water, which results in a liquid with similar properties to eggs.

So for our vegan waffle recipe, aquafaba will be taking the place of eggs.

When aquafaba is whipped, it creates a foam that traps air- this will give our waffles structure and a fluffy consistency.

To measure out the amount of aquafaba you'll need, first vigorously shake the unopened can of chickpeas.

Next, drain the chickpeas through a strainer over a bowl. Let the aquafaba drain into the bowl and save the chickpeas for another time.

Whisk the aquafaba for a couple of seconds, and then measure out ½ cup.

One 14 oz. can of chickpeas will yield enough aquafaba to make these waffles.

WHAT OIL TO USE

Now, you may have noticed that we will be using melted coconut oil, but you can use vegan butter or canola oil instead.

Coconut oil, canola oil, and vegan butter all measure out with each other on a 1:1 ratio, so whichever you use it will stay ¼ cup.

Although you can use any of the three ingredients mentioned, I suggest using melted coconut oil or canola oil over butter.

The oil will allow the waffles to crisp up, making them crispy on the outside and fluffy on the inside, as a proper waffle should be.

I used unrefined coconut oil to make these waffles.

Unrefined coconut oil is commonly labeled as "virgin" or "pure" coconut oil. It adds the slightest bit of sweetness and coconut flavor that compliments these waffles.

But, if you only have refined coconut oil on hand, it will work just as well.

No matter if you use coconut oil, canola oil, or vegan butter, your waffles will be on point.

TIPS FOR MAKING THE BEST WAFFLES

To make these vegan waffles, you are going to need a waffle iron.

When you pour the batter in, do not overfill the waffle iron. Just use enough batter to cover the surface of the iron.

How do you know when your waffle is done?

It is going to depend on your waffle iron. Some will beep, and others have a light to indicate when they're done.

A good indicator to use is to watch the steam coming out of the waffle maker. When the steam stops, the waffle should be good to go.

Since you can only make one waffle or two waffles at a time, I suggest keeping the cooked waffles in a warm oven at 200°F (93°C) until you are ready to serve.

The oven will keep the waffles hot and crispy.

HOW TO MAKE VEGAN WAFFLES

Now that we have the ingredients covered and know some tips, it's time to make some vegan waffles.

So gather your ingredients, get out your waffle iron, and let's get to it!

First, preheat your waffle iron according to the manufacturer's instructions.

In a medium bowl, combine the flour, brown sugar, baking powder, and salt. Mix these ingredients to combine.

Put the aquafaba and lemon juice in a mixing bowl. Whisk vigorously or beat on a high setting to get it as light and foamy as possible.

Add the plant milk of your choice, melted coconut oil, and vanilla to the flour mixture and gently whisk everything together.

Next, add in the whipped aquafaba and fold it into the batter with a mixing spoon until everything just combines.

Pour the recommended amount of waffle batter onto the hot iron.

Cook until the waffle is golden brown on both sides and slightly crispy.

Serve immediately or keep in the oven until ready to serve.

WHAT TO PUT ON YOUR WAFFLES

One of the best parts about waffles is the toppings you put on them.

You can pretty much top waffles with anything and everything.

If you just want a classic waffle, go with vegan butter and maple syrup.

For a healthier breakfast, put some fresh berries or bananas on top of your waffles.

If you love peanut butter and jelly sandwiches, spread jelly on one waffle and peanut butter on another and put them together for the perfect vegan brunch sandwich.

Or you can put spread any of your favorite kinds of nut butter on the waffles.

My personal favorite combination is spreading on almond butter, putting slices of bananas on top, and finishing it off with a maple syrup drizzle.

For an ultimate vegan dessert, put a scoop of your favorite vegan ice cream between two waffles.

As you can see, the possibilities are endless!

However you top your waffles, they will be delectable.

An awesome part about making waffles is they store super well.

This recipe will make about 8-10 waffles, depending on the size of your waffle iron.

If you're making these waffles, you might as well double or triple the batch so you can always have a quick vegan breakfast ready to go.

You can wrap your leftover waffles individually or put them in an airtight container and store them in the refrigerator for 2 to 3 days.

Although they last in the refrigerator for a few days, I recommend freezing all of the waffles you don't finish.

For recreating the fresh off the press waffle experience, pop them in a toaster until they are thoroughly warmed and crispy.

This recipe is perfect for making a family breakfast or brunch with friends.

Of course, you can make them for yourself and have fresh waffles that day or frozen waffles for weeks to come.

No matter what when you make them, I hope you love these vegan waffles as much as I do.

Make sure to share this recipe with anyone who wants the best vegan waffles in the world. 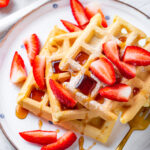 These vegan waffles are light and fluffy on the inside while being perfectly crispy and golden on the outside. They have the exact texture and consistency that you would want in a waffle. Plus, this recipe is incredibly easy to make. As long as you have a waffle iron, you can whip up the best vegan breakfast or brunch in no time.