This vegan banana pudding is layered with a creamy dairy-free custard, fresh bananas, vanilla cookies, and topped with vegan whipped cream. The simplicity of this recipe makes it a convenient vegan dessert for when you're in a pinch or need a delicious dessert to share.

If you like vegan treats with blended textures and flavors, this homemade banana pudding takes the prize.

Banana pudding is known for the layers within the dish—the layers alternate between the custard pudding, bananas, and vanilla cookies.

The layers give you variety within the dessert, and you can change how you prepare the layers, essentially giving you a new dessert every time.

Personally, I like making thinner layers of each, so I get all the components in every bite. The smooth pudding and soft bananas paired with the crunchy cookies make this dessert irresistible.

And, honestly, I find myself making this recipe on a regular basis because I always have the ingredients lying around, and, also, it's just super easy to prepare.

All that said, let's go over what you'll need to make it!

The pudding is the only thing that you will actually need to make for this recipe. Everything else you can buy pre-made and ready-to-go.

Typically, banana pudding is made with both milk and condensed milk. But we, of course, want to keep things vegan, so we'll be using yummy plant-based ingredients to make this dish.

That said, for the pudding, you'll only need six common household vegan ingredients. And most of them are probably already in your pantry!

That said, here's what you'll need for the pudding:

And then, for the other layers, you'll need:

So, I suggest using a combination of firm and ripe bananas for this recipe. The idea is that the firm bananas help to create firmer layers that won't blend in with the pudding, and the ripe bananas add some natural sweetness.

With that being said, you can use bananas at any stage, and this pudding will be just as delicious.

Also, if you are worried about the bananas browning before serving this dish, here is a simple trick... Lightly brush the slices with lemon juice before adding them into the recipe.

Combining the cornstarch, canned coconut milk, and plant-based milk will give the pudding it's thick and creamy custard-like consistency.

So, here's a run-down on some common choices, and what to expect if you use them:

Soy milk is going to have the most similar texture to dairy milk. It also has a comparable fat and protein count. Also, soy milk holds up well when heated, making it a good option for this banana pudding recipe.

Oat milk is the new plant-based milk buzzword, and rightly so. It is creamy and has a toasty oat flavor. For this reason, it compliments pretty much any recipe.

Almond milk has a naturally sweet flavor making it great for various vegan desserts and baked goods like cookies, biscuits, and muffins.

Cashew milk has a nutty flavor and a lower fat content than other plant-based milk. Due to its low fat content, the recipes you use it in will be a bit denser and drier.

Anyway, just keep these tips in mind when you're selecting a plant-based milk to use for this recipe.

How To Make Vegan Banana Pudding

One of the best parts of this recipe is its simplicity since the only thing you need to cook is the pudding.

The assembly is effortless, and you can customize it to your preferences as well.

Feel free to make as many layers of pudding, banana, and cookie crumbles as you'd like. You can also add more of one element if you want it to be the focus of the dessert.

Also, this banana pudding recipe makes four servings, but it can easily be doubled or tripled depending on how many people you will be serving.

And, just so you know, this recipe works best when prepared just before serving, especially if you want to maintain the contrast in texture of each layer - silky smooth pudding, crunchy wafer cookie crumbles and firm bananas.

But, there is a way to prepare some of the ingredients ahead of time to make this easy recipe even more convenient.

Now, I know you're ready to get rolling, so let's make some vegan banana pudding!

To get started, grab a medium saucepan and add in ⅔ cup of plant milk of your choice, 1 cup of canned coconut milk, sugar, vanilla extract, and turmeric.

Then, in a separate cup, whisk together ⅓ cup of plant milk with 3 tbsps of cornstarch - this will be the thickening agent for your pudding. But, don't worry about adding this in just yet, we'll use it in a bit.

Now you're going to place the saucepan over medium-high heat to heat up the ingredients. And make sure you are whisking frequently. You want to bring the plant milk, coconut milk, sugar, vanilla, and turmeric mixture to a boil.

Then, once the ingredients reach a rolling boiling, remove the saucepan from heat and pour in the whisked plant milk and cornstarch mixture from earlier.

Now, return the saucepan to the heat, and continuously whisk until the mixture thickens and starts to boil.

Once it thickens, take it off the heat to cool.

Ok, so the hardest part is over!

Now, you just need to let the pudding chill completely before assembling your layered pudding.

First, allow it to cool on the counter at room temperature for a few minutes, and then refrigerate it until well chilled.

Chilling the pudding will help it to thicken and give your pudding the best results. But, don't rush this step! If you are not going to serve the pudding immediately, it is best to leave the pudding in the fridge until you are ready to assemble and serve.

However, for those of you preparing this dessert in advance, this is where I recommend you pause.

While your pudding is chilling, start to prepare your banana slices and cookie crumbles.

Unpeel and slice the bananas to the thickness of your choice. For firmer bananas, thinner slices often work best. For softer bananas, a thicker slice helps the pudding maintain its layers.

Then put the vanilla wafers in a sealable plastic bag.

Try to let most of the air escape before sealing. Then use a rolling pin or even a canned good to crush the cookies in the bag until they are smashed into small chunks and crumbs.

Choosing what to serve it in

Now, before you start layering, pick the vessel in which you'd like to make and serve your pudding. However, the best choice can depend on how much pudding you are making and who you are making it for.

I'd recommend using a glass or transparent container, if possible, to show off the thiccck layers of your vegan pudding.

But honestly, anything can work for this dish!

A trifle will give your pudding a classy look and allow people to serve themselves, especially if you are hosting a larger gathering.

Individual glass dessert jars can be another great option for serving a smaller number of guests.

But like I said, any large serving bowl will do the trick.

Now, if you make this recipe for yourself or your family and don't plan on eating it in one sitting, I do recommend using individual glass dessert jars.

Making and storing individual portions make this already easy recipe, even more convenient. And, that way, it can be ready-to-go when you are - as a quick dessert before bedtime or a sweet treat in your lunchbox.

Anyway, for the assembly, grab your container(s) and alternate between adding layers of pudding, banana slices, and cookie crumbles.

And you can build as many layers as you like or your container will allow.

Oh, and if you have the time, I highly recommend chilling the dessert just for a bit after assembly and before serving.

Now, if you end up with leftovers, seal the container(s) and try to enjoy within a day or so since the layers of the pudding will eventually blend and lose their texture.

DO NOT assemble your banana pudding unless you are going to eat it within a few hours.

You risk the bananas turning brown and the cookies getting soggy.

Now, while it is best to make and serve your banana pudding on the same day, you have a couple of options if you would like to prepare it ahead of time.

The vegan pudding will last in the fridge for 2-3 days after it is prepared. But, remember to let it cool at room temperature first before storing it in an airtight container in the refrigerator.

Also, You can freeze the pudding mixture for up to 3 months in an airtight container. Before using it, just let it thaw in the fridge for a few hours. Then your pudding is ready to go whenever you are!

This homemade layered banana pudding is an easy and delicious vegan dessert that requires minimal time and ingredients.

And, anyone who loves banana cream pie won't be able to get enough of this pudding.

Anyway, I hope you love this vegan banana pudding as much as I do.

As always, let me know what you think about this recipe in the comments below if you try it! 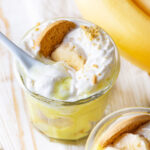 This vegan banana pudding is layered with a creamy dairy-free custard, fresh bananas, vanilla cookies, and topped with vegan whipped cream. The simplicity of this recipe makes it a convenient vegan dessert for when you're in a pinch or need a delicious dessert to share.