Pink Whitney is one of the most popular flavored vodkas right now. And this recipe creates the ultimate Pink Whitney drink! Light, refreshing, and an enjoyable buzz, it'll quickly become your new favorite mixed drink.

If you're looking for what to mix vodka with, or need a new go-to drink, you've come to the right place

Now, you may be wondering, what is Pink Whitney? If you've never heard of it, Pink Whitney is a pink lemonade flavored vodka drink by New Amsterdam Vodka, named after one of the Spittin Chiclets Podcast hosts, Ryan Whitney.

Ryan Whitney is a former NHL player who started a hockey podcast, and it's grown to be one of the biggest podcasts from Barstool Sports. So, the drink Pink Whitney has become insanely popular over the past few years.

And since it's so tasty, I decided to make my own version. And, let me tell you, this Pink Whitney drink is as refreshing as it gets. It has the perfect balance of vodka and pink lemonade for a drink that just tastes like a party.

You can whip it up in just seconds, and it's easily one of the best vodka drinks you can make if you're hosting. So, pass out a few of these Pink Whitney drinks to your friends, and let the good times roll!

If you really want to get the good times going, mix in a few of these liquid marijuana shots, applesauce shots, and Mexican candy shots!

Or you can make my all-time favorite, this green tea shot.

Oh, and if you're looking for a snack to go with your drink, try making these Instant Pot Peanuts or Popcorn.

This Pink Whitney is one of my all-time favorite 2-ingredient vodka drinks. And along with the two main ingredients, I like to add a few to complete the taste and aesthetic of the drink.

Here's what you'll need to make it:

Now, you can use any vodka and pink lemonade that you want to make this mixed drink! Whatever your favorites are, they'll create a refreshingly delicious Pink Whitney.

And if you want to change it up a bit, check out the different variations you can make below.

Mixing the vodka with pink lemonade is a great drink in itself, but there are so many ways you can add a little twist for other.

All of these variations are awesome and make for a great change-up. Just follow the original recipe and add any of these suggestions above that you want to it!

HOW TO MAKE A PINK WHITNEY DRINK

So, making this Pink Whitney drink might be the easiest mixed drink you ever make, and it literally takes seconds to do!

And if you want to serve this at a party, you can triple or quadruple the recipe and put the drink in a pitcher for everyone to enjoy.

First, take out a cocktail shaker or any large cup that you can seal on a lid.

Next, add in the vodka and pink lemonade of your choice and anything else if you're making one of the variations. Top it off with a splash of lemon juice and give it a couple of good shakes to mix everything together.

Once it's mixed, put some ice cubes in a glass and pour in your Pink Whitney drink. Then garnish with a lemon slices and you can add a stirring straw to complete the look.

And this recipe will make two drinks, so you'll have another waiting for you right after you finish it off! The best part, if you want to make one for a friend of need to whip up a few more, you can do it in seconds. Enjoy!

Well, that is how to make a Pink Whitney drink from scratch!

If you've wondered what is so special about Pink Whitney, now you know.

Combining pink lemonade and vodka seems so simple, yet it's such an underrated mixed drink that is out of this world good.

It's light, refreshing, and has the perfect balance of mixers with vodka - it really doesn't get much better than this!

Anyway, I hope you like this Pink Whitney drink as much as my friends and I do.

If you try it, leave a comment below and let me know your thoughts.

Oh, and by the way, if you're in the mood for more of a dessert-y cocktail, our mudslide recipe, and espresso martini are always a hit. So, definitely give those a go if you love chocolate and coffee!

Pink Whitney Drink | The Best Vodka Drink You Can Make 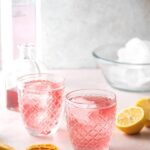 Pink Whitney is one of the most popular flavored vodkas right now. And this recipe creates the ultimate Pink Whitney drink! Light, refreshing, and an enjoyable buzz, it'll quickly become your new favorite mixed drink.