The Best Vegan Biscuits and Gravy

Biscuits and gravy is a classic southern recipe that has been bringing flavor to dinner tables for centuries.

And it's a common menu item at various restaurants like Cracker Barrel, but unfortunately, there is never a vegan-friendly option.

But, thanks to this recipe, you'll now be able to enjoy a southern style meal anytime at home.

And this vegan biscuits and gravy recipe defines comfort food, giving you two recipes that come together seamlessly to create a ton of savory deliciousness.

That said, today we will be making our biscuits and gravy with vegan staples like vegan butter, plant-based milk, and vegan sausage. And doing so will turn our biscuits into a buttery treat and give this dish an excellent plant-based protein source as well.

So, if you want to make this easy, flavorful, vegan breakfast recipe, let's get into the ingredients and see what brings it all together!

If you're in the mood for more of a sweet vegan breakfast, you'll definitely want to make this vegan waffle recipe.

As I just mentioned, we'll be using several different dairy free and meat free ingredients to make this recipe.

So, for the vegan biscuits you need:

And for the vegan gravy you'll need:

The ingredients used to make the gravy is especially noteworthy. As I'm sure you know, gravy is typically a no go if you are vegan or vegetarian since it - almost always - has animal-based ingredients in it.

However, thanks to this vegan sausage and some plant-based milk, this gravy is just as the ones with meat & dairy.

Plant Based Milks To Use

Nowadays, there seems to be an endless number of plant-based milk to choose from, and using the right one is essential for getting the best flavor out of your dish.

With that said, choosing which plant-based milk is right for your recipe depends on the type of dish you are preparing.

That said, if you're making a savory recipe - like this vegan biscuits & gravy recipe - you'll want to use an unsweetened, unflavored plant-based milk.

Doing this will ensure that you don't add any unwanted & unnecessary flavors/sweetness to whatever you're making.

With that said, to make your vegan gravy, you can use cashew milk, almond milk, soy milk, or coconut milk. Just make sure they are UNSWEETENED and UNFLAVORED.

My suggestion though is to use unsweetened unflavored almond milk to make this vegan gravy.

How To Make Vegan Biscuits and Gravy

For this dish, we will be preparing two recipes - one for biscuits and one for gravy.

Fortunately, you can make both of them at virtually the same time, and neither of them requires too much effort.

By following just a few quick and easy steps you can have a delicious vegan breakfast on the table in no time.

It doesn't get much better than that, does it?!

Now, let's get down to it and make this comfort food staple.

Then, combine the flour, baking powder, and salt in a bowl and whisk together with a fork.

Next, grate the vegan butter into the dry ingredient mixture.

Now, you'll want to add the plant milk to the dry ingredients and butter mixture. And be sure to stir it with a spoon until the dough clings together.

That said, if the dough is dry, add a little milk to it until it isn't.

Now, once the dough has formed, put it onto a countertop and knead it a few times with your hands. And, at this point, if the dough is sticking to the counter, add a little bit of flour to it as needed.

Ok, so to form the biscuits, roll the dough until it is about an inch thick.

Then cut the dough into rounds and place them on an ungreased cookie sheet. I suggest using a biscuit cutter to make it easier to cut out a round shape.

Now, once you've got your biscuits shaped, bake them in the oven for around 15 minutes. You'll know they are done when the dough has fully risen and turned golden brown.

So, when the biscuits are done, it's important that you immediately transfer them to a wire rack. Leaving them on the cookie sheet can cause them to cook more and become overdone.

Now, will the biscuits are cooling down, you can focus on making the vegan gravy.

So, the first thing you'll want to do is put a saucepan over medium heat, and add in the olive oil.

Then, chop the mushrooms up, and sauté them in the olive oil for around 3 minutes.

Once those have softened and cooked down a bit, add the sausage and spices and cook for 2 more minutes. And make sure to crumble the sausage with a spatula as your mixing everything with it.

Now, after that looks good, sprinkle the flour over the sausage crumbles, and slowly pour the plant milk into the pan while stirring.

Then, you'll want to continue to cook and stir the gravy until it thickens.

Once the biscuits are fresh out of the oven, put them on a plate and pour as much warm gravy as you want over the top. I like to put extra on mine to completely cover the top and sides of the biscuit.

Sprinkle with salt and pepper to taste and dig in!

One of the best parts about this recipe is that you can make it in advance and enjoy it throughout the week.

The gravy will last in the fridge in an airtight container for up to 5 days.

Alternatively, if you want to make sure you always have some vegan gravy on hand, you can store it in the freezer for 4-6 months.

That said, to reheat the gravy, put it in a saucepan on the stove over low heat. And as it heats up you'll want to consistently stir it so that it reheats evenly.

You can also reheat the gravy in the microwave. If you do this, take it out and stir every 30 seconds until it reaches your desired temperature.

Now, no matter which way you reheat it, the gravy may be quite thick. So, if that's the case, just mix in some water or vegetable broth to thin it out.

When it comes to the freshly baked biscuits, they will last at room temperature for up to 4 days. Just store them in an airtight container or resealable plastic bag.

However, if you want them to last longer you can store the biscuits in the fridge for up to 1 week.

By the way, if you want these biscuits to last even longer, you can store them in the freezer for 2-3 months. Just wrap each biscuit individually with heavy-duty foil or plastic wrap, and then put them in a freezer bag or airtight container.

Then, to reheat your frozen biscuits, just transfer them to a baking sheet and bake in the oven at 350°F for 15-20 minutes.

Wrapping it all up

And there you have it; a southern comfort food classic turned vegan.

This vegan biscuits and gravy recipe sure does make for a delicious breakfast. And it might also give you some pretty tasty leftovers too.

Anyway, I hope you enjoy this recipe as much as I do.

And, as always, if you give this recipe a try let me know what you think in the comments below! 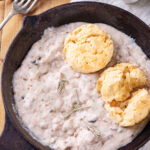