These twice baked mashed potatoes have all the flavor of loaded potatoes, but are done in one pan and ready in half the time! The recipe combines buttery and creamy potatoes with bacon and cheddar cheese, and then everything gets baked until golden perfection. So, if you're looking for a tastier alternative to classic mashed potatoes look no further.

And that's because as good as twice baked potatoes are, they can be a bit of a pain to make. You have to bake the potatoes, then scoop them out, mix in all the toppings, stuff them back in, and bake again.

It's a lot of work for something that takes a few bites to finish! And when you're serving a crowd, you're pretty much spending the whole day just working on an appetizer - and that's a hard pass for me.

That's why this recipe for twice baked mashed potatoes is such a stroke of genius! You're basically just making mashed potatoes, except leveling them up with all the toppings you love in loaded potatoes. Then, all you have to do is bake it in one dish, so it's all ready to go after it comes out of the oven.

Plus, these mashed potatoes have the added benefit of just looking so darn impressive on the holiday table too. Don't be surprised if it instantly becomes a family favorite side dish for Thanksgiving!

Speaking of Thanksgiving, if you do end up making this easy mashed potatoes recipe for it, I highly recommend serving them with this seafood stuffing, this brown gravy recipe, and this sweet potato cobbler.

This twice baked mashed potatoes recipe only requires a few simple ingredients. And all of them come together to create delicious mashed potatoes that are so light, fluffy, and flavorful.

Check out everything you'll need to make this recipe:

But, you can also use Yukon gold potatoes or even sweet potatoes if you'd like! Or, if you want to try out red potatoes, you can make this red skin mashed potatoes recipe.

For the cheese, I like using cheddar cheese just because it's always a crowd-pleasing option. But you could also use Gruyere, Swiss, Monterey Jack, or any other cheese that melts well.

By the way, you can use all of these same ingredients to make my cheesy mashed potatoes or air fryer baked potatoes, so you might want to check that recipe out sometime as well.

So, making this dish is incredibly easy!

Most of the time spent is just easy prep work. Once you have the potatoes going, the rest is just a matter of mixing and baking.

By the way, this recipe makes 6 servings of baked mashed potatoes, but you can easily double or triple it as needed for a larger crowd.

Before I begin, I prefer peeling my russet potatoes (or Yukon gold potatoes), but you can definitely leave the skins on if you like. I think it gives it that rustic, homey feel. Just make sure to give them a good scrub under running water.

Then, cut the potatoes into uniform pieces so they cook evenly.

Now, place the potatoes in a large pot of salted water and bring everything to a boil. I recommend salting your water because it helps to season the potatoes as they cook.

After it reaches a rolling boil, reduce the heat to low and let the potatoes simmer for about 25 minutes until they're fork-tender.

While the potatoes are cooking, you can shred the cheese, cook and crumble the bacon, and measure out everything else so it's ready to go.

Once they're cooked, use a colander to drain all the water from the pot. Then put the potatoes back in the same pot they cooked in.

Now, mash the potatoes with a potato masher, fork, or immersion blender until they reach your desired consistency.

Step 4: Mix in the toppings

Next, add the sour cream, butter, milk, half of the cheese, bacon, and a little salt and pepper to the pot of mashed potatoes.

Then, give everything a good stir until it all of the toppings combine with the mashed potatoes.

So, now you can transfer the potatoes to a greased baking dish and spread them into an even layer.

Next, top the potatoes with the remaining cheddar cheese, and you can add even cheese if you want.

Then, broil the potatoes in a preheated oven on high for a few minutes until the cheddar cheese topping is melted and bubbly.

Now, to finish up, let the twiced baked mashed potatoes cool for a few minutes inside the baking dish before serving. Then, top it with whatever you like, such as even more bacon, chopped chives, green onions, or a dollop of sour cream. Serve and enjoy!

As you know, this recipe will make 6 servings of twice baked mashed potatoes. And if you're serving them for Thanksgiving or a big family dinner, there probably won't be any left.

But, if you manage to have some left over, these delicious mashed potatoes keep very well - which is why they're fantastic for making ahead.

Honestly, because they store so well I love having 'em ready and chilling in the fridge overnight - or even a couple of days ahead of time - and then having them ready to go. Plus, knowing these twice baked potatoes are ready to go into the oven takes so much stress out of entertaining if you're making them for an occasion!

Anyway, to store the leftovers, let the potatoes cool completely and then transfer them to an airtight container and refrigerate for up to 5 days.

You can also freeze these mashed potatoes for up to 3 months. Just let them thaw overnight in the fridge before reheating.

So, there are a few ways you can reheat these twice baked mashed potatoes.

The first is to simply bake them in the oven until warmed through. This is my preferred method because it gives the potatoes a little bit of crispiness on top and heats the whole thing evenly. And if you stored them in the same baking dish, you can just cover them with foil and bake them at 350 degrees Fahrenheit until heated through.

Otherwise, transfer the potatoes from the airtight container to an oven-safe dish, cover them with foil, and bake.

Another option is to reheat them in the microwave. This is the quickest method, but make sure to watch it, or you'll end up with dry mashed potatoes. To reheat, place the potatoes in a microwave-safe dish, cover, and heat for 30 seconds to 1 minute. Stir and repeat until heated through.

By the way, if you're reheating a large batch of mashed potatoes, you can also reheat them in a slow cooker. This is great for keeping them warm during a party or potluck. Just place the potatoes in your crock pot and set it to low. Cover and heat until warmed through, stirring occasionally.

Why are they called twice baked potatoes?

Twice baked potatoes are called "twice baked" because they're, well, baked twice. You start by cooking the potatoes until they're nice and soft. Then, you scoop out the insides, mash them up, and mix in all the delicious toppings. Finally, you bake them a second time until the cheese is melted and bubbly. So, what you end up with is a twice baked potato that's nice and creamy on the inside and crispy on the outside.

Do you put egg in twice baked mashed potatoes?

There's no need to add an egg into twice baked mashed potatoes - atleast not with this recipe.

The potatoes are already nice and fluffy, and the egg would just make them overly dense. In addition, once the mashed potatoes start cooling down, they will have a more solid texture. That's why we don't need to use eggs as a binder.

Can I make these twice baked mashed potatoes without dairy?

Yes, you can! If you're looking for a dairy-free version, simply substitute the milk and butter for non-dairy alternatives. Try using plain unsweetened almond milk or coconut milk. As for the butter, you can use a vegan butter or even olive oil.

If you don't want to use any cheese, you can leave it out altogether. These twice baked mashed potatoes will still be super creamy and flavorful. However, there are some terrific plant-based cheese options available now that would be great in these creamy mashed potatoes.

Why are my twice baked mashed potatoes falling apart?

There are a few reasons why your twice baked mashed potatoes might be falling apart.

First, make sure you're using starchy potatoes, such as Russets or Yukon. These potatoes have more starch, which helps them hold together better.

Second, don't over-mash the potatoes. Once you start mashing, the potatoes release their starch and start to fall apart. So, just mash them until they're smooth and creamy.

Well, that is how to make twice baked mashed potatoes!

These are so rich in flavor, fluffy, and wonderfully creamy.

Every time I serve this, my family always devours them, and I am constantly getting requests to make them. Also, I don't mind since this recipe is such a breeze to make.

As always, I'd love to know how this recipe turned out for you, and if you have any questions, feel free to leave a comment below.

If you're looking for some more delicious recipes, we have a ton on the blog that you have to try next!

Check all of these delicious recipes out: 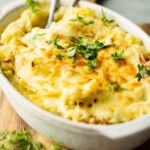 These twice baked mashed potatoes have all the flavor of loaded potatoes, but are done in one pan and ready in half the time! The recipe combines buttery and creamy potatoes with bacon and cheddar cheese, and then everything gets baked until golden perfection. So, if you're looking for a tastier alternative to classic mashed potatoes look no further.

½ teaspoon each of salt and black pepper