The Olive Garden giant cheese stuffed shells are one of their most popular dishes. And if you've never ordered it before, you're in for one of the most delicious pasta recipes you'll ever have.

Now, what I think makes them so delicious is they're baked in two different sauces that combine to make a dish of pasta deliciousness like no other. The stuffed shells sit on top of a flavorful marianara sauce and then are topped with a rich and creamy Alfredo sauce.

And if you like the combination of these two pasta sauces - and Olive Garden in general - then you just have to try this lasagna fritta recipe next! Just like these giant cheese stuffed, they taste just like the ones from Olive Garden.

Now, it may seem like this stuffed shells recipe requires many ingredients, but you actually only need a few, and they're all super simple!

In fact, it's crazy that you can recreate Olive Garden's giant cheese stuffed shells with just a few everyday kitchen staples.

Anyway, everything you'll need for the stuffed shells:

For the toasted breadcrumbs to go on top:

And for the Alfredo Sauce:

Once it's broken down into parts, you can see how simple this recipe is.

And if you want to make it even easier, you use a store-bought Alfredo sauce.

With that said, I think the homemade alfredo sauce in this recipe is worth making, but you can definitely pick some up from the store, and it will cut down on the ingredients and cooking time.

By the way, make sure to grab some extra ricotta cheese from the store. You can use it to make this ricotta pie for dessert!

Alright, so this recipe has a few layers, but each one is super straightforward.

It also doesn't involve too much multitasking, so you won't get overwhelmed.

Oh, and if you have a cooking partner, this stuffed shells recipe will be even easier to make.

Now, grab the ingredients, and let's get cooking!

Now cook the shells according to the package instructions.

Now, while that's baking, you can make the alfredo sauce. To do that, add the heavy cream, butter, and parmesan cheese to a small pot and cook over medium heat until bubbly. Then, give it a stir and set aside for later.

Now it's time to make the cheesy mixture that will fill the shells. But before we do that, spread the marinara sauce on a baking tray or in a baking dish.

Then, in a bowl, combine the ricotta cheese, Italian cheese blend, & egg and mix until it's well blended.

Then, carefully stuff the cooked giant shells with the ricotta mixture. Transfer each shell to the prepared baking dish - or tray - and top with the alfredo sauce.

Then, take them out of the oven, and sprinkle all of the toasted breadcrumbs on top.

So, this cheese stuffed shells recipe will make 4 servings. But don't worry if you can't finish all of them, because the shells store super well.

To store, let everything cool, and then transfer to an airtight container. The stuffed shells will last in the fridge for about 3-5 days.

By the way, the best way to reheat these giant cheese stuffed shells is to put them in an oven-safe dish and cover them with aluminum foil. Then, bake at 375°F (190°C) for around 10 minutes, or until warm throughout.

And if you want to keep them for longer, you can freeze the stuffed shells as well.

There's nothing better than making this recipe in the comfort of your own home. This dish is so full of cheesy goodness with staple pasta elements that just make it to die for.

I'm pretty confident that the entire family will like this recipe even better than the one from the restaurant!

I hope so, atleast.

Anyway, If you give these giant cheese stuffed shells a try, let me know your thoughts by leaving a comment below.

If you liked this Olive Garden copycat recipe, we have some more recreation of recipes from famous restaurants!

And for even more delicious recipes check out our YouTube Channel. 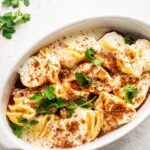