This general tso shrimp only takes 10 minutes to make, and everything cooks in one pan! The shrimp are coated in a sweet and slightly spicy sauce with a flavor you can't get in any other dish. And after you make this general tso shrimp recipe at home, you'll never want to order it for takeout again.

General tso shrimp is a classic Chinese takeout order, and for a good reason. It is a simple dish that packs a ton of flavor, and if you've never had it before, you're missing out.

Seriously, if you like shrimp and you like sweet sauces with a bit of kick, you're going to love this recipe. Personally, I'm a huge fan of ordering general tso's shrimp for takeout, but this homeamade recipe is just so much better than anything you'll get from your average Chinese restaurant.

There's just something about the flavors - and the umami - in my homemade general tso sauce recipe that really takes it to another level of deliciousness.

And what's great about this recipe is the entire thing cooks in just one pan, making it an easy and seamless cooking process.

On top of that, the whole recipe will only take you about 10 minutes to make! Just like this sweet and sour shrimp recipe!

So, you will need some pretty simple ingredients to make this delicious general tso.

Check out what you'll need for the shrimp:

And for the general tso sauce:

If you want to serve this shrimp over rice, I highly suggest making this Instant Pot Sushi Rice. It goes so well with this saucy shrimp.

Now, if you don't have a few of these ingredients, you're going to want to make sure you pick them up because you don't want to miss out on all this flavor.

Oh, and you should probably pick up some extra, too - you can use the majority of these same ingredients to make this  Firecracker Shrimp and Empress Chicken. Both are deliciously flavorful meals that I highly suggest you try out next.

HOW TO MAKE GENERAL TSO SHRIMP

Now, let's get down to the good stuff.

As I've mentioned already, not only is this recipe easy to make, it is super quick too.

So anytime you need to whip up dinner on short notice, this general tso recipe comes in clutch.

If you're ready for some flavor, get your ingredients together, and let's get cooking!

The first thing you will do is make the sauce.

Get out a small bowl and add all of your sauce ingredients to it. Then, whisk your ingredients together until they are well combined, and a sauce forms.

You can set your bowl aside for now - we'll be using it soon.

First, take out a wok or large pan and put it over medium heat.

Then, add your sesame oil to it, and heat your oil for 30 seconds.

Next, add your minced garlic and ginger and saute for 30 seconds, stirring them constantly.

After that, add your shrimp to your wok or pan and saute for 2 minutes.

Now, get your bowl of sauce and give it a good whisk.

Then pour your sauce over the shrimp and turn up your heat a little bit.

Finally, cook everything and constantly stir for about 2-3 minutes until the sauce thickens.

Serve your general tso shrimp over a bed of rice and top with green onions and sesame seeds.

So, this recipe will make about 3 servings of shrimp, so odds are you won't have any leftovers. But what is great about this recipe is you can easily double or triple it for a family dinner or if you want to meal prep for the week.

Then you can store your leftovers in an airtight container in the fridge for up to 3 days.

And you can either enjoy it cold or reheat your dish.

The best method for reheating this shrimp is using the oven. First, preheat your oven to 325°F (160°) and put your leftovers in an oven-safe container covered in tin foil. Then heat for about 5-10 minutes and remove the foil in your last few minutes of heating.

That is how you make quick, easy, and seriously flavorful general tso shrimp.

You can make this dish a meal for one or turn it into a feast for the entire family by doubling or tripling the recipe!

Anyone who tries it will think it's better than any takeout version they've ever had.

I hope you enjoy this general tso shrimp recipe! Make sure to leave a comment below and let me know what you think.

Let's be honest, anything that you can order for takeout is so much better made at home.

So here are some delicious takeout inspired meals to try cooking up in the comfort of your own home: 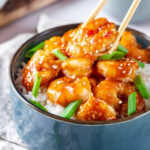 This general tso shrimp only takes 10 minutes to make, and everything cooks in one pan! The shrimp are coated in a sweet and slightly spicy sauce with a flavor you can't get in any other dish. After you make this general tso shrimp recipe at home, you'll never want to order it for takeout again.