This dumpling sauce recipe is so simple yet packed with so much flavor. Soy sauce, rice vinegar, sesame oil, and a few other basic ingredients combine to form a richly flavorful sauce that's perfect for your next batch of dumplings. Best of all, it takes just 1 minute to put this dumpling dipping sauce recipe together!

If you've been looking for something to dip your Chinese dumplings (also known as potstickers) or gyoza in, then you have to give this dumpling dipping sauce a try! It's so, so good!

Now, I think that Chinese dumplings and Japanese gyoza are only as good as the dumpling dipping sauce that's paired with them and this sauce is absolutely top-notch, so I always make it to go along with 'em. It just has the perfect balance of sweet, salty, and spicy flavors, and I just feel like dumplings just seem incomplete without it.

Plus, making this dumpling sauce is a breeze. You literally just mix all the ingredients in a bowl, and it'll take you just 1 minute to do it!

Also, I love how easy it is to customize this sauce to suit your preferences. I'll get into more detail on that later on though.

Oh, and the good news is that you don't have to use this dumpling sauce only when you're making dumplings. In fact, I always have some of this stuff in my fridge to pull out at a moment's notice. It's just so versatile and even makes for a great stir-fry sauce!

Honestly, I love serving it with this Texas Roadhouse grilled shrimp, potato mochi, and panko breaded chicken. I'll even drizzle it on top of this microwaved ramen!

With that said though, this dumpling dipping sauce is, of course, best served with my homemade shrimp dumplings. So you'll definitely want to make those along with this sauce!

As I mentioned earlier, you need just a couple of basic ingredients to make this dumpling sauce recipe. In fact, you probably have most - if not all - of them at home already.

Anyway, here are all of the Chinese dumpling sauce ingredients:

By the way, you can use most of these ingredients to make this McDonald's Szechuan sauce. So, if you want another versatile dipping sauce, give that a try next.

So, I always make this sauce with the Chinese dumpling sauce ingredients above, but as I mentioned, this recipe is easy to customize if you want to change the flavor.

As for the rice vinegar, it can be swapped for apple cider vinegar, white wine vinegar, or rice wine vinegar. I've even used Chinese black vinegar before, and I found it added a pleasant umami-like flavor to the sauce.

For a touch of sweetness, the sugar can also be swapped for brown sugar or honey.

Lastly, if you want to add a bit of extra spice to your dumpling sauce, you can add some extra chili oil or you can even add some chili flakes or red pepper flakes to it. With that said, if spicy stuff isn't your thing feel free to omit the chili oil altogether.

How To Make Dumpling Sauce

Again, making this recipe for dumpling sauce couldn't be easier to make.

You basically just combine all of your ingredients in a bowl, mix it all up, and then serve at your convenience. It's really that easy!

First, you'll want to take out all of your ingredients, along with a medium-sized mixing bowl, a ¼ cup, and a teaspoon to measure everything out.

Next, you'll want to add the soy sauce, sugar, rice vinegar, sesame oil, minced garlic, sesame seeds, and chili oil to the bowl. Then, give everything a good mix until the sugar dissolves and the ingredients fully combine.

Now, once the sauce ingredients have fully mixed together, you can give it a taste and adjust the seasonings as needed.

Then, when you've got the sauce where you want it, you can either use the sauce immediately with some Chinese dumplings, Japanese gyoza, or whatever you want!

Also, if you don't want to use the sauce immediately, you can store it for later.

How To Store Dumpling Sauce

This recipe for dumpling sauce makes about ¼ cup worth of sauce. That being said, it's effortless to double - or triple - the recipe if you want to make more of it.

Also, if you made a big batch, and have extra, you can store the leftover dumpling sauce in an airtight container - or sealed glass jar - in the fridge for up to 2 weeks.

Alternatively, if you want to keep the sauce for even longer you can freeze the dumpling sauce for up to 6 months. Then, to thaw it, either place it in the fridge to thaw overnight or put it in a large bowl and run it under cold water in the sink.

FAQs About This Dumpling Sauce Recipe

What sauce do you eat gyoza with?

Traditional dipping sauce for Japanese gyoza usually contains a combination of regular soy sauce and rice vinegar, with optional chili oil or red pepper flakes. Sesame oil is also a good additional ingredient that adds a depth of flavor to your gyoza dipping sauce. With all of that said though, this easy dumpling sauce recipe is the perfect sauce to eat gyoza with!

Can you eat soy sauce with dumplings?

Yes, you can absolutely eat soy sauce with dumplings. Pretty much every filling in dumplings goes great with classic soy sauce. But, if you want to put something on your dumplings that has a little more flavor to it, then this soy sauce-based dumpling sauce is just what you need.

Well, that's how to make dumpling sauce from scratch!

This dumpling dipping sauce is everything you need, whether you're making dumplings from scratch, making frozen dumplings, or are looking to elevate plain noodle dishes or a variety of other foods.

It's honestly so flavorful, and the fact that it's so quick and easy to make is just a bonus.

Anyway, I hope you like this easy dumpling sauce as much as my family and I do.

As always, if you give it a try, leave a comment below and let me know your thoughts.

If you like Asian-inspired recipes - and are looking for some more delicious recipes just like it - we have a bunch on the blog you can check out next!

Here are some of our favorites:

The BEST Dumpling Sauce Recipe Made In 1 Minute 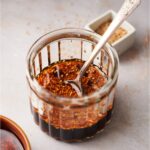 This dumpling sauce recipe is so simple yet packed with so much flavor. Soy sauce, rice vinegar, sesame oil, and a few other basic ingredients combine to form a richly flavorful sauce that's perfect for your next batch of dumplings. Best of all, it takes just 1 minute to put this dumpling dipping sauce recipe together!