These caramel rolls are the fluffiest and tastiest treat you can make for the holidays. The perfectly spongy cinnamon rolls have an ooey-gooey brown sugar cinnamon filling with a golden caramelly topping that is just to die for. They honestly taste like they're from a bakery, and once you take one bite, you'll want to make them again and again.

And as good as regular homemade cinnamon rolls are, this caramel rolls recipe takes them to a whole new level of deliciousness. There's just nothing that comes close to them, and once you get a taste, you'll see what I mean.

This caramel rolls recipe creates a soft, moist bread roll filled with the perfect combination of warm cinnamon and sweet brown sugar flavors. The sticky buns by themselves are addictively delicious, but the signature feature of this recipe makes them irresistible. And that would be the sweet golden homemade caramel sauce that goes on top. It's honestly so good that you'll want to eat it with a spoon!

Now, since these caramel rolls look and taste so incredible, you might think that they're impossible to make, but that couldn't be further from the truth.

Seriously, this caramel rolls recipe is actually super straightforward, and it only consists of five simple steps. They'll walk you through how to make the cinnamon sugar filling, fluffy roll dough, and sweet caramel topping. Trust me, even if you've never made cinnamon rolls from scratch, you'll find this recipe to be a walk in the park.

Oh, and for what it's worth, I think these caramel rolls are perfect for serving after this Christmas breakfast casserole, so you might want to check out that recipe too!

Now, to make these caramel cinnamon rolls, you only need a few basic baking items and ingredients. In fact, I bet you have most, if not all, of them already on hand!

Anyways, here's what you'll need for the cinnamon roll dough:

For the cinnamon filling:

And lastly, for the caramel sauce:

See what I mean? Such basic baking ingredients!

Oh, and you can use a lot of these same ingredients to make this caramel cake, another one of my favorite recipes with caramel sauce, so you might want to check that out next!

How to Make Caramel Rolls

So, although these easy caramel rolls are simple to make, they will take a little time, but every second is totally worth it!

All in all, you're looking at about 1 hour of on-and-off prep work, 1 hour for the dough to rise, and about 20 minutes for the caramel cinnamon rolls to bake.

With that said, the caramel rolls effortlessly come together if you follow the steps below. So without further ado, let's not waste any more time and get baking!

First, you'll make the cinnamon roll dough. Start by adding the dry yeast, sugar, and lukewarm water to a large mixing bowl and give it a mix so everything combines. Then you can set it aside for 10 minutes.

After 10 minutes, add the melted butter and egg to the yeast mixture and mix until everything is well combined. Then you can add the all purpose flour and salt to the same bowl and fold them into the rest of the ingredients until the dough comes together.

Once the flour is incorporated, knead the dough-like mixture with your hands until a smooth ball of dough forms. If you have an electric mixer with a hook attachment, feel free to use it for kneading the dough.

Anyway, now that you have a ball of dough, place a towel or plastic wrap lightly over the mixing bowl and let the dough rest in a warm place for about 1 hour or until the dough rises and doubles in size.

While the dough is rising, you can move on to making the filling.

To make the filling, add the brown sugar, ground cinnamon, and butter to a microwave-safe bowl. Then place the bowl in the microwave and microwave it for about 15 seconds, and stir well until all the butter is melted and the ingredients are smooth. If the butter hasn't melted, you can microwave everything for another 5-10 seconds.

Now it's time to make these delicious caramel cinnamon rolls come together!

By now, the dough should have risen and doubled in size. So while the dough is still in the bowl, you can press down on it to remove any air bubbles. The dough should feel smooth and almost spongy.

Next, place the soft dough onto a lightly floured surface and use a rolling pin to roll out the dough to a ½-inch thick rectangle.  Make sure to do this on a floured surface, or the dough will stick to the table.

Now that the dough is flattened, you can spread the cinnamon filling that you prepared in the last step evenly over the dough. Then roll the dough into a log shape, starting from the long side.

Next, cut the rolled dough log you formed into about 12-15 pieces to make the cinnamon rolls.

Ok, now that the cinnamon rolls are almost ready, preheat the oven to 350°F (180°C) and line a baking dish with parchment paper.

Then you're going to place the cinnamon rolls in the prepared baking dish, cover them loosely with a kitchen towel, and set them aside to rise once more. This will take no more than 30 minutes, and they should again about double in size.

Once the cinnamon rolls have doubled in size, place them in the preheated oven and bake rolls for 20-25 minutes or until they're golden brown.  Then you can place the baked caramel cinnamon rolls on a wire rack to cool while you make the caramel sauce.

Finally, you're going to make the caramel sauce to complete these caramel cinnamon rolls!

So to make the caramel sauce, melt the butter in a small saucepan over medium heat. Once the butter has melted, add sugar, corn syrup, and condensed milk to the pot and mix to combine everything together. Then cook the mixture for a few minutes until bubbly, and a candy thermometer reaches 220°F.

How to Store Caramel Rolls

As you know, this recipe for caramel rolls will make about 12-15 rolls.

Now, every time I make these delectable caramel cinnamon rolls, I never have any leftovers. Seriously, everyone in my family comes back for a second or third until they're all gone!

But with that said, if you happen to have leftovers, these carmel rolls store really well. You can just transfer the leftover caramel rolls to an airtight container, and they'll stay good at room temperature for up to 2 days, in the fridge for up to a week, or in the freezer for up to 2 months.

You'll just want to make sure that the caramel rolls cool completely before you store them.

How to Reheat Caramel Rolls

Whenever you're ready to enjoy these caramel rolls again, they're definitely best reheated.

So to reheat, just individually warm one roll in the microwave at a time for about 10 seconds or until the caramel sauce melts and the cinnamon rolls are nice and soft. Then enjoy it again just like it's the first time!

With a recipe this good, you won't only be making these for the holiday season but all year round. These caramel rolls are light and fluffy with a gooey brown sugar filling and sticky sweet caramel topping that creates a combination like no other.

I know I'm biased, but not only do I think these are the best caramel rolls you'll ever make, I think this is the best cinnamon rolls recipe out there. Well, at least my friends and family who have tried this recipe think so.

Anyways, I hope you love this recipe as much as I/we do. Of course, if you give it a try, let me know how it goes in the comments below.

If you're looking for more sweet treats that are just as delicious as these salted caramel cinnamon rolls, we have a ton on the blog you can try next!

Here are some of our most popular recipes: 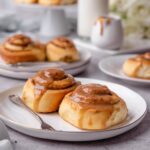 These caramel rolls are the fluffiest and tastiest treat you can make for the holidays. The perfectly spongy cinnamon rolls have an ooey-gooey brown sugar cinnamon filling with a golden caramelly topping that is just to die for.  They honestly taste like they're from a bakery, and once you take one bite, you'll want to make them again and again.